The modern bass drum as played today in every military band, in the orchestra and in jazz, rock and pop, was imported from the Middle East, and did not, as may be assumed, evolve from the various drums that were widespread in the whole of Europe from the Middle Ages. It is a direct descendant of the davul, also known as the tabl turki (Turkish drum), which is known to have existed in Mediterranean regions from the 14th century. This was a large, cylindrical drum with a narrow shell and two thong-braced heads which was played without snares.

In Europe a 1502 painting by the Venetian artist Vittore Carpaccio is the first portrayal of a Turkish drummer with an instrument of similar proportions to the modern military bass drum (a narrow shell with a head about 70 cm in diameter). The drum hangs at the drummer’s breast where it is beaten with two thick wood sticks. Until the middle of the 18th century such Turkish drums were a rare sight in Europe.

Large numbers of Turkish drums came to Europe in the 18th century with Turkish troops and their military bands and were enthusiastically received and immediately integrated into European military music. The initial impression to western ears of an exotic sound was due principally to the combination of Turkish drum, cymbals and triangle that was found in Janissary music.

Not only was the large size of the drum a novelty but the playing technique was new as well: the instrument was either placed vertically on a base or, for marching, hung at the breast. The head was struck from the right-hand side with a large wood stick with no padding while the left hand rested on the left-hand rim of the shell. On the left side, the drummer struck the head with a single rod held as flat as possible, which produced a snapping sound. The wooden drumstick was used on the accented beat, the rod on the unaccented one. If a drum with only one head was used, which was only rarely the case, the drummer would beat the head alternately with the stick (right hand) and the rod (left hand).

In the second half of the 18th century Janissary bands were very popular at the courts of European princes. One consequence of this was the gradual introduction of the large Turkish drum into orchestra music, especially into the opera, usually to create an oriental atmosphere. Gluck used it as a stylistic device in his Le cadi dupé (1761), Mozart in his Entführung aus dem Serail (1782). Haydn used it in accordance with its origin in his Military Symphony (1793/94). In these early orchestra works the Turkish drum, or big drum as it was called owing to its enormous proportions, was still played in the Turkish style, i.e. with a wood drumstick and a rod, with double note stems written into the scores.

In addition to oriental-style drums with a narrow shell, other bass drums were used in military bands and the orchestra into the 19th century, the shells of which were wider than the head diameter, which was about half a meter. These long, tube-shaped drums became known as long drums.

The bass drum as an orchestra instrument

At the beginning of the 19th century Spontini, in his opera The Vestal Virgin (1807), became the first composer to require the bass drum to be struck with felt-covered mallets. By so doing he deprived the instrument of its oriental tone.

In contemporary performance practice the cymbals were struck together with the somber and menacing-sounding drum, which had only simple sequences of beats to play, unless cassa sola was required. The cymbal notes were an integral part of performance practice and were not written into the score. This is true especially of Italian operas of the time, e.g. Verdi’s Rigoletto (1851) and La Traviata (1853). In many cases the cymbals were mounted directly on the bass drum and played by the drummer.

Gradually more complex playing techniques for the bass drum became widespread. In his Symphonie fantastique (1830) Berlioz scored the first roll, which he explicitly required to be performed by two timpanists with timpani mallets. The first roll to be performed by one percussionist appears in Liszt’s Ce qu’on entend sur la montagne (1849). Later, rolls were also performed with one stick, the drummer beating either with the head and the end of the handle alternately or with a two-headed stick.

In orchestras of the late Romantic period (last third of the 19th century) the bass drum became firmly established in the orchestra percussion section. It was beaten from the side, albeit not directly as in Janissary practice, but in a large downward arc. In addition, musicians began to position the drum differently: it was placed on a wood stand (wood block) so that the head, now lying almost horizontally, could be beaten.

Fashion-conscious composers used the bass drum with a cymbal mounted on it to such a degree that Berlioz felt moved to complain in his Instrumentation Theory (1843) that it was being subjected to “the most dreadful abuse”: the bass drum was being used by “effect-hungry art novices” who only wished to impress “through orchestra pomp and power effects” to the detriment of musical appeal.

Modern forms of the bass drum

From the middle of the 19th century rope tensioning was gradually replaced by screw tensioning. The shell was no longer made solely of wood but also of brass or aluminum. The skin of calves or horses, and very occasionally of donkeys (it being hard to come by) was used for the head. Nowadays the bass drum in the orchestra is usually suspended from a frame, allowing it to swing freely and to be positioned at any angle. Occasionally it is placed on a special drum stand. Today orchestra drums have a diameter of 70–100 cm and the shell is 35–55 cm deep.

In the middle of the 19th century a version of the bass drum with only one head gained popularity, particularly in England. This drum had a narrow shell, open on one side, and became known as the gong drum. It was said to have superb resonance, but tended to produce a definite pitch, a characteristic that drums were not supposed to have. Gong drums are now used only very rarely.

From the beginnings of Janissary music to the present day the bass drum has played an important role in military and wind bands. It performs the task of emphasizing the accented beat, especially in marching music. Bass drums used in military music are about 25–45 cm deep and 35–75 cm in diameter and are therefore smaller than their counterparts in the orchestra. 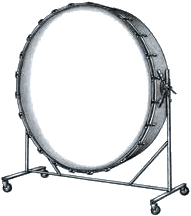 At the beginning of the 20th century the bass drum became an important part of jazz percussion and a new playing technique emerged: striking the drum with the bass pedal, invented in 1909 by William F. Ludwig in Chicago. The bass pedal made it possible for drummers to play other instruments, such as the snare drum and the cymbals, at the same time as the bass drum. The practice of entrusting the entire percussion set (drum kit) to a single player spread from big bands and be-bop combos to rock and pop music and the bass drum became smaller and smaller in order to produce the dry, short sound favored in popular music. Today, models with a depth of 30–40 cm, a diameter of 45–70 cm and plastic heads are used in popular music.