Shawms in the Renaissance period

In the Middle Ages shawms – wind instruments played with either a single or a double reed – were common throughout Europe.

The forerunner of modern bassoons and oboes was a kind of shawm which generally had seven sound holes, a conical tube and a double reed. This was the bombarde or pommer.

In the 16th century instrumental polyphony evolved, following the example of vocal music. This development led to the construction of instrument families. During the Renaissance period the bombarde or pommer family included instruments in seven ranges, from the third octave above middle C (treble shawm, the direct antecedent of the oboe) to the contraoctave (great bass shawm). The name was derived from the low instruments, the bomhardes (from the Latin bombus meaning “muffled sound”, “rumble”).

Attempts were therefore made to construct a maneuverable bass instrument by “folding” the tubing after the fashion of the trumpets and trombones to make it shorter. In the second half of the 16th century these attempts resulted in the construction of an instrument the body of which consisted essentially of a hollowed-out, U-shaped wooden block. The tubing was conical along its entire length. A small S-shaped tube was attached to the narrow end of the tube to which the double reed was fixed. The other end flared out to form a bell.

Because this new instrument possessed a mellow and pleasant sound which distinguished it from the pommers it was given the name dulcian (“sweet-sounder”). It is not known in which workshops dulcians, the direct antecedents of the modern bassoon, were first made.

For many years the so-called phagotum was regarded as the direct forerunner of the modern bassoon. This was an instrument with two parallel wooden pipes which was made from 1513 onward by the Italian collector of musical instruments Afranio degli Albonesi. However, it was later found out that it really belonged to the bagpipe family, since it had metal reeds which were vibrated by means of bellows.

Beside the name dulcian the appellations fagot, curtall and basson were also adopted very early in the instrument’s history and were used at the same time.

The French term fagot meant “bundle of sticks, faggot”, and was first applied to a musical instrument in Italy in the early 16th century. Since the middle of the 18th century the bassoon has been known as the Fagott in German-speaking countries and the fagotto in Italian. The name curtall (German: Kortholt) literally means “short wood” and was the earliest name given to the dulcian in England. The term was adopted after the instrument had been curved into a U shape and thus considerably shortened, and is derived from the Latin word curtus meaning “short”. The French term basson originally had the general meaning of “bass”.

Dulcians were made in several tunings. In the second volume of his Syntagma musicum (1620) Praetorius includes a total of eight tunings.

The choristfagott enjoyed special status among the dulcians from the very beginning. It was first mentioned in 1592 in Zacconi’s Prattica di musica and was about one meter tall, had eight finger-holes and two keys. Its range was from C2 to G4, with the notes from C3 upward being produced by overblowing. The bell often had a perforated lid which made it sound similar to a stopped organ pipe.

The appellation “choristfagott” possibly derived from the fact that the instrument was used to reinforce the bass voice of the choir. It played a leading role in sacred music of the 17th century and subsequently also in opera and concertante music, in which it was increasingly able to liberate itself from its restrictive role as a support to the bass and appear in consort with other dulcians, in small ensembles and even as a solo instrument, for instance in Selma y Salaverde’s Canzoni, fantasie et correnti, 1638). Its debut as an orchestral instrument was probably in 1668 in Antonio Cesti’s opera Il pomo d’oro .

Challenging techniques were being required of stringed instruments as early as the 17th century, and the strings were proving themselves more than capable of meeting them. Greater demands were subsequently made on the wind instruments, too, particularly with regard to range and sound quality. These new demands meant that the pommer, with its inflexible timbre and limited range, gradually disappeared. The dulcian, on the other hand, possessed a host of qualities which made it ideally suited for further development.

In the middle of the 17th century instrument makers in Amsterdam, Paris and Nuremberg began constructing the body of the choristfagott in four parts: wing joint, boot, long joint and bell. The range of the new, four-part instrument, which became generally known as the bassoon (French: basson) was extended downward by a whole tone. This meant that the bassoon, which now had three keys (F2, D2 and Bb1), was able to hold its own against the contemporary bass instrument of the string family, the basse de violon. What it did not have, however, was the notes B1 and C#2. 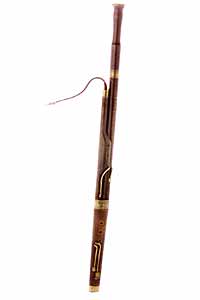 The new bassoon fulfilled a number of different functions: together with two oboes it formed a woodwind group that was used to contrast with the strings (by Jean Baptiste Lully or Henry Purcell, for example). In orchestral composition it was given the task of playing obligatos (by J.S. Bach, for instance), and many composers, such as Antonio Vivaldi, wrote bassoon concertos. In chamber music it was often used in sonatas and trio sonatas (e.g., by G.F. Handel and Jan Dismas Zelenka [1679–1745]). In the Classical period numerous chamber music pieces for bassoon and strings were written. In the orchestra, two bassoons were used.

In the 18th century improvements to the bassoon focused primarily on increasing the number of keys.

In around 1700 the bassoon was given a fourth key (the G# key for the right little finger). This determined the playing position of the hands (right hand below the left) once and for all. Further additional keys were to improve the quality of some of the low notes, which had previously been played using cross-fingerings. The addition of speaker keys – for which reliable evidence exists from 1787 – represented a major step forward, since they made overblowing considerably easier. The most famous classical workshops were Bizey, Lot and Prudent in France and Grundmann and Grenser in Germany.

Although it was possible to play notes in the high register up to F5 on bassoons with five keys, it was not until the speaker keys were added that contemporary composers were persuaded to ask for notes above G4. In about 1810 models with six keys and two additional speaker keys on the wing joint (for A4 and C5) became standard.

19th century – the birth of the modern bassoon

Compared to the other woodwind instruments, the number of significant changes made to bassoon construction in the course of the 18th century was small. This “neglect” became particularly apparent at the beginning of the 19th century, as the bassoon began to have obvious difficulties coping with the growing demands made with respect to sound quality and technique in orchestra and solo literature: The notes B1 and C#2 were still missing from the range, the tone quality of a number of other notes was very poor and legato playing proved extremely difficult especially in keys containing a large number of accidentals.

This situation changed dramatically in the 19th century thanks to the innovations of several instrument makers, and most especially thanks to Carl Almenraeder’s (1786–1843) sweeping reforms.

Leading workshops in Paris, Vienna and Dresden made valuable contributions to solving the tuning problem by equipping their instruments with tuning slides on the wing joint or providing wings or bocals of various lengths. Keys for B1 and C#2 were added. To increase the volume attempts were also made to widen the bell. The boot was given the short, U-shaped joint in place of the cork component.

In 1817 the bassoonist and instrument maker Carl Almenraeder from Mainz in Germany embarked on a project which was to last years and ultimately result in a technically complete, agile and responsive bassoon with a well-balanced overall sound.

Beside his own mechanical improvements Almenraeder also made use of the inventions of other instrument makers and adopted some of the suggestions of his friend Gottfried Weber, who had undertaken a thorough study of the acoustic properties of woodwind instruments. He placed the tone holes from A2 downward nearer the bell and increased their diameter. He also replaced the resonator hole in the bell with an open key for B1.

In 1843 Almenraeder’s comprehensive guide to his 17-key bassoon was published. This instrument had a chromatic range from B1–Bb5, in other words, four octaves. Following his death his colleague Johann Adam Heckel (1812–1877) took over the management of the workshops they had started together in 1831.

Today, following several further alterations, the German Almenraeder-Heckel bassoon has 25–27 keys. It first gained popularity in the German-speaking world and became the international standard during the 20th century.

In France, the Romance countries and parts of Canada, on the other hand, a French model with 22 keys is in use.

The basson has tubing which is longer and more narrowly conical; the tone holes are narrower. Unlike the German bassoon the French basson has a closed Bb1 key, the tone holes for B1, C#2 and D#2 are drilled in the front side and the tone hole for E2 (on the boot) has no key. It developed in the workshops of J. F. Simiot de Lyon, Frederic Guillaume Adler (died 1857), Savary (1786–1859), Jean Nicolas (1786–1853), Frederic Triébert (1813–1878) among others and was later further refined by the firm of Buffet-Crampton.