The term cimbasso emerged in Italy at the beginning of the 19th century and is probably an abbreviation of corno in basso (bass horn). Although the term was in everyday use among musicians, composers, conductors, publishers and instrument makers throughout the century, the meaning of cimbasso was clear only to the extent that it described nothing more or less than the voice below the trombones, the deepest brass voice in fact. This voice description was used consistently throughout the 19th century in Italy and is found in operatic scores from Bellini to Verdi and Puccini. However, the instruments that played this part differed over the course of time and from region to region. 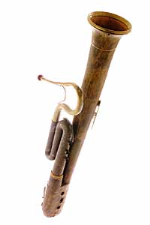 At the beginning of the century the brass section’s bass voice was the province of the serpentone, often also called the corno di basso (bass horn). A more advanced version of this instrument came from England and was a kind of serpentone in the form of a bassoon, made of brass and with nine finger-holes. It had the same range as the earlier serpentone. At this time the term cimbasso described both types of serpentone. The instrument from England presumably found its way into orchestral music by way of military bands and stage music. It is known to have been used at La Scala in Milan between 1815 and 1820. Later, similar instruments of the same type were called “Russian bassoon” or “Austrian contrabassoon” in Italy: their body was made of wood, the bell of brass and the mouthpiece of horn. The six finger-holes and two keys enabled a range from C2 to G4. The timbre of these instruments was said to be pure and powerful.

From the 1830s onward the ophicleide, which had originated in France, gained popularity in Italy. The first models had keys, the later ones valves. The difference between the ophicleide and the bassoon-shaped bass horn – which remained in use as the cimbasso – was the fact that the former instrument was made of metal, only had keys and possessed a deeper range (to B1). Despite this the term cimbasso was also applied to the ophicleide. Verdi’s early operas in the 1840s thus featured a valved ophicleide which was described as a cimbasso (Oberto, 1839, Nabucco, 1842, Ernani, 1844).

In the years that followed, the bombardon became increasingly widespread in Italy. Over the years the bore of this bass instrument became wider and wider, while its construction and mechanism came to resemble the ophicleide so closely that the two instruments were barely distinguishable. The name cimbasso was therefore also used to describe the bombardon. 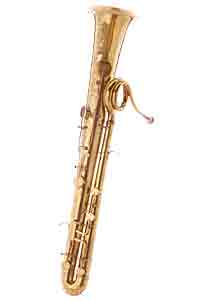 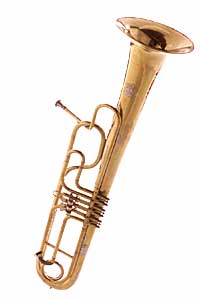 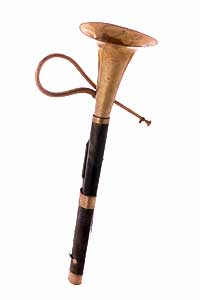 The trend toward imbuing bass instruments with an ever greater range and volume by means of increasingly wide bore profiles and a larger cone led in the mid-19th century to the construction of tuba-like instruments which had an entirely different timbre. Composers such as Verdi called for instruments with narrower bore profiles (e.g., in his opera Aida from 1871), because their timbre was better suited as the bass voice in a harmonic trombone section. This led to the birth in 1881 of the modern cimbasso. Giuseppe Verdi (1813–1901) inspired the Milanese instrument maker Pelitti to make a valved contrabass trombone with a bell facing forward. Although Verdi only ever wrote two scores specifically for this instrument after 1881 (Othello in 1887 and Falstaff in 1893) it nevertheless became traditional to perform the deepest brass part, including the 4th trombone in Verdi’s earlier operas, on the “new cimbasso”. In fact, this tradition has now spread to encompass other Italian operas such as those by Gaetano Donizetti (1797–1848) and Vincenzo Bellini (1801–1835).