The flute is one of the oldest musical instruments of all and is regarded as the first ever wind instrument. It has been in use at least since the Stone Age.

Flute playing has a particularly long tradition in the Orient. The Sumerians and Egyptians were among the first to add three or four finger-holes to their bamboo flutes, which enabled them to produce several notes.

The Ancient Greeks also had quite sophisticated flutes, which were blown at the open upper end and had six finger-holes. However, the flute was regarded as an instrument of the common man and as such was held in scant regard. In contrast, the aulos , a distant precursor of the oboe, was always associated with high social standing.

The flutes used in today’s orchestras are transverse flutes, as opposed to the Greeks’ end-blown flutes and the (modern) recorder. The first evidence of the use of transverse flutes in Europe comes from Etruscan iconographs from the 4th to the 1st centuries BC. Side-blown flutes were also known to the Romans.

The Middle Ages and the Renaissance – drums and consorts

Between the fall of Rome and the 11th century no evidence is known to exist for the use of transverse flutes. It is probable that the instrument returned to the West from the Orient by way of the Byzantine Empire. The transverse flute of the Middle Ages was made of a single piece of wood and had six finger-holes. It was used in military contexts and was even played at court. Traveling minstrels acquainted their audiences with it all over Europe, and since they originally came from Germany the instrument also became known as the fistula Germanica. It was usually accompanied by a drum.

In the 16th century the flute consort, an ensemble consisting of three different-sized transverse flutes, became an established part of musical practice. At the same time broken consorts, ensembles combining various instruments such as the viol, lute and flute, were also popular.

The most common flute was in D and had a range of D4–D6 (which could be extended if the player was skillful enough). Since the instrument was tuned to D the notes of other keys could only be produced either by half covering the finger-holes or by using cross-fingerings. This gave the instrument a certain chromaticism but meant that intonation remained uncertain, which placed the flute at a disadvantage compared to the other woodwinds.

From the middle of the 17th century the flute underwent several sweeping changes. From 1660 onward it consisted of three separate parts: the cylindrical headjoint, the body with six finger-holes, and the footjoint. The body and footjoint were conical. An additional hole was added to the footjoint and fitted with a key to make D# playable. These innovations, which probably originated from the Hotteterres, a French flute-making family, represent the start of the development of the transverse flute as we know it.

In 1681 a Hotteterre flute with a range of 2½ octaves (D4–G6) was used in Jean-Baptiste Lully’s (1632–1687) opera orchestra, its first appearance in an orchestra of this type. Its wide range and brilliant timbre meant that the transverse flute soon became a serious rival to the recorder.

The recorder (or fistula Anglica), an end-blown instrument, had originated in England and gained popularity in Europe at the same time as the transverse flute, becoming established as an orchestral instrument. But from the middle of the 18th century the description flauto in musical scores no longer referred to the end-blown recorder but the transverse flute (which had hitherto been described as the flauto traverso).

The sound quality of the baroque transverse flute was still far from homogeneous and consistent, however. The irregularities in its range and the subsidiary notes which resulted from the use of cross-fingerings and had a different timbre were felt to be irksome in modulations. If it was possible to compensate for the shortcomings of the baroque flute’s intonation then only by means of exceptional virtuosity.

The common practice of changing the body only accentuated these problems; to achieve a different tuning it had become customary to insert either a longer or shorter body, but no change was made to the arrangement of the finger-holes, which would have been necessary to accommodate the instrument’s altered acoustic properties. The introduction of the exchangeable body is attributed to the virtuoso flutist Pierre Gabriel Buffardin (ca. 1690–1768).

Efforts to improve the transverse flute soon spread from France to other countries. The Prussian flutist and composer Johann J. Quantz (1697–1773), Frederick the Great’s flute teacher, studied the intonation problems of the instrument in great detail, later becoming a flute maker himself. He invented the tuning slide, experimented with various shapes and sizes of tone hole and added another key. These improvements, along with his treatise “Versuch einer Anweisung, die Flöte traversiere zu spielen” (An Essay on Instruction in the Art of Playing the Transverse Flute), published in Berlin in 1752, and his approximately 400 compositions for the instrument (chiefly concertos for flute and strings) boosted its popularity and brought it to the attention of ever more composers.

In harmonic theory the passage from one key to another is called modulation. Such changes have been customary since the 17th century and have developed into an important factor in the harmonic structuring of pieces of music.
Modulation can be so smooth as to be almost imperceptible, or abrupt; between the two extremes every degree of change from a key of departure to an arrival key has been tried out.

One of the most common – and smoothest – types of modulation is diatonic modulation. This works between related keys, i.e. between keys which have one or more triads in common. The different functions of a triad common to the key of departure and the arrival key are used as follows: the triad, which has a specific function (e.g. subdominant) in the key of departure, is simply allotted the function (e.g. dominant) that it will have in the arrival key. The feeling of having reached the arrival key is strengthened by a cadence.

In physics modulation describes the change wrought on a carrier by a second wave (modulator). If a very high and constant frequency is influenced by a second frequency, it is termed frequency modulation (FM); if a constant amplitude is used and an influence exerted on it, it is termed amplitude modulation (AM). FM has been used in synthesizer technology since the early 1980s, a technique which enables the production of characteristic sounds containing many overtones. Vibrato and tremolo are also based on the principle of physical modulation.

By the end of the 18th century the transverse flute had firmly established itself as an orchestral instrument. Conversely, it had steadily lost importance as a solo and chamber music instrument from the 1750s onward. Many composers were of the opinion that the flute was no longer able to cope with the latest harmonic and formal developments; in addition, the shift of the audience from courtly to bourgeois circles – and thus from small, intimate rooms to large concert halls – resulted in the advent of an entirely new sound ideal, which required, among other things, a more powerful sound.

But despite permanent attempts to improve the transverse flute’s sound and structure it proved quite impossible to achieve anything like a standard form until well into the 19th century. 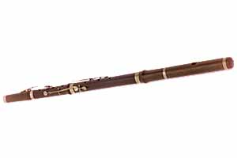 In the mid-18th century instrument makers in London added three more keys, thus rendering cross-fingerings virtually obsolete. In addition they reintroduced the C footjoint, which had already been in use at the beginning of the century. These changes signaled the start of a period during which the transverse flute was equipped with an ever larger number of keys.

At the turn of the 19th century, instruments with eight keys were standard, the first such flute being devised by the flutist Johann G. Tromlitz (1726–1805). Flutes with more than eight or nine keys were the exception rather than the rule. The keys did not do much to improve the sound quality, and led to more complicated fingerings into the bargain.

It was not until 1830 that a solution appeared to be on the way at last. The flutist of the court orchestra in Munich, Theobald Boehm (1794–1881), began to develop a new and comprehensive concept for the construction of flutes. Inspired by the attempts made by some of his peers to redesign the instrument, he began an intensive study of the key work and the size and shape of the tone holes. He also incorporated the ideas of other flute makers into his work, especially the ring keys patented in 1808 by Reverend Frederick Nolan and the principle of attaining a more powerful sound by means of larger tone holes, an idea that Tromlitz had already experimented with.

In 1847 Boehm presented an improved flute with cylindrical tubing and a parabolically conical headjoint – a revolution in instrument-making of the time.

The new flute also included an improved key work which featured the pin springs patented in 1839 by Louis-Auguste Buffet. Boehm added felt pads to the key cups to prevent the escape of air. He changed the shape of the embouchure, which hitherto had been oval or round, to a rectangle with rounded corners. The material he chose was German silver, to which he ascribed the best acoustic properties.

The Boehm flute was received with enthusiasm in France, England and the USA. It was awarded many prizes, including one at the World Exhibition in Paris in 1855. In Boehm’s home country, however, his instrument was greeted with a good deal of skepticism, a feeling echoed in Italy and Russia. These misgivings were due mainly to the new fingering, which flutists in these three countries were reluctant to accept. One prominent opponent of the Boehm flute was Richard Wagner, who described it disparagingly as a “blunderbuss”, presumably on account of its unusually powerful sound. Several instrument makers subsequently tried to make a model to rival the Boehm flute, but it was the latter’s form that ultimately gained general acceptance.

Modern flutes are still made using the Boehm mechanism, which underwent only very slight modifications and improvements during the 19th and 20th centuries.

Once a technically complete flute with a satisfactory timbre had established itself, the amount of solo literature for the instrument increased dramatically. Composers began to explore the limits of the instrument, and experiments with different tone colors and means of articulation resulted in a whole new palette of playing techniques.