Like all the members of the oboe family the English horn evolved from the shawms of the Middle Ages. During the Renaissance the shawm family included the bombardes (or bombardons), the direct precursors of modern double-reed instruments, and instruments of every pitch, from the treble shawm (third octave above middle C) to the great bass shawm (contraoctave).

During the 17th century the treble shawm evolved into the hautboy (also known as the hoboy in England, and as the hautbois in France), the forerunner of the present-day oboe. The tenor oboes, which evolved from the alto bombarde (the tubing of the deeper bombardes was angled, giving rise to bassoons), began to be modeled on the soprano instrument a short time later.

Tenor oboes in the 18th century 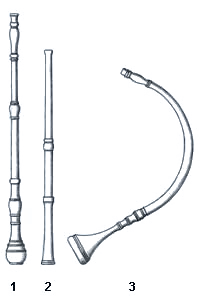 During the 18th century several types of tenor oboe pitched in F (today this register would be alto) were being made. Four of these instruments were used in contemporary double-reed consorts to play the middle voice, while two soprano oboes and a bassoon covered the upper and lower registers. It was toward the end of the century that the English horn, now the alto instrument of the oboe family, established itself.

Until the end of the 17th century the earliest tenor oboe in F, the taille (de hautbois), had the same form as the oboe, although it was somewhat larger because of its lower pitch. It consisted of three parts and had two keys. Around the turn of the century a pear or bulb-shaped bell was added, probably by German oboe makers. The instrument was common in many parts of Europe, and in England was known as the tenner hautboy. It was used primarily in concert music and the theater, e.g., in Henry Purcell’s Dioclesian (1690), religious music (e.g., in Johann Sebastian Bach’s cantatas) and wind bands. In about 1780 it disappeared.

The vox humana, a straight tenor oboe in F consisting of two parts, was used in England and southern Italy from the second third of the 18th century. Its body was plain and unadorned, and the bell flared only very gently. It had six finger-holes and two keys and was played chiefly in double-reed consorts in church. In around 1780 it was superseded by the English horn.

The oboe da caccia (hunting oboe, hautbois de chasse/de forêt), was played between 1720 and 1760 in some parts of central Europe, mainly Germany. This sharply curved tenor oboe in F with a flaring bell was made out of a single piece of wood and covered with leather. The curved shape was achieved by cutting out wedges and then stretching the instrument over an arch. The flaring bell gave it an overall appearance reminiscent of a horn, hence the name. The most famous part written for this instrument is Johann Sebastian Bach’s St. Matthew Passion, in which two oboi da caccia (and one transverse flute) accompany a soprano aria.

The modern English horn was developed in around 1720, probably in Silesia, by adding a pear-shaped bell to the oboe da caccia. The oboe maker J. T. Weigel was evidently one of the first to make such a ”cor anglais”, as the instrument was known. The keywork was the same as on the oboe, the reed was fixed on a short, curved, small pipe. In the course of the century the shape became less curved, until by the end of the century an angular form of the instrument had established itself too. This form remained popular for decades afterward.

The name ”English horn” is most probably derived from the horn-like shape of early tenor oboes, especially the oboe da caccia: it seems to have resembled the horns with which angels were depicted in religious illustrations from the Middle Ages and thereafter. In Middle High German the word engellisch meant ”angelic” (German Engel = angel). At the same time, however, it also meant ”English”, which may explain how the latter adjective came to be applied to the instrument after the disappearance of the early tenor oboes.

Another theory suggests that the French term cor anglé (”angled horn”), which described the angled instrument, became cor anglais (”English horn”) over time. However, it is likely that the name English horn was in use before the angled form of the instrument appeared (in around 1790).

The English horn in the orchestra

Niccolò Jommellis paved the way for the admission of the English horn into the orchestra with his Ezio, premiered in 1749 in Vienna. Initially the instrument was always used in pairs. One of the first composers to use the English horn regularly was Christoph Willibald Gluck, who first scored for it in La danza (1755). The English horn subsequently gained great popularity in Italian opera, in which it was given the task of performing lyrical and vocal-like parts. Italian opera houses were established in many European cities, including Vienna, Munich, Dresden, Hamburg, Milan, Venice, Naples and Lisbon. It was also in these cities that the makers of English horns set up their workshops.

At the beginning of the 19th century French musicians began to take an interest in the new-style low-pitched oboe, too. The virtuosity of the oboist and English hornist Gustave Vogt (1781–1870), a professor at the Paris conservatoire, inspired several composers to write outstanding parts for the English horn, among them Gioacchino Rossini (e.g., the solo in the William Tell Overture) and Hector Berlioz.

It was Berlioz who began exploiting the English horn’s typical sound characteristics, which he did from his earliest works, to evoke sentimental, melancholy and mournful moods. In his Theory of Instrumentation (1843) he notes that no other instrument can convey ”feelings of absence, abandonment, painful isolation” as vividly as the ”English horn”. Throughout the entire century the English horn was used exclusively to perform such quintessentially romantic and elegiac tasks.

From 1810 the distinguished oboe maker Guillaume Triébert worked together with Gustave Vogt on technical improvements to the English horn. He added extra keys and straightened the lower joint. The Triébert workshop began producing English horns with straight tubing from about 1860.

For his part, Vogt’s successor at the Paris opera, Henri Brod (1799–1839), had developed his own straight version of the instrument in 1830, which he called first an alto oboe and later a cor anglais moderne.

The straight English horn had better resonance than its predecessor and was more manageable. The modified version of Henri Brod’s instrument produced by François Lorée (1835–1902) remains the blueprint for the construction of English horns today.

At the beginning of the 19th century the English horn was hardly ever used in German-speaking countries; consequently it is missing from Beethoven’s late works, and from Schubert, Spohr, Brahms and Weber. It was not until the Romantic period that composers such as Richard Wagner, Richard Strauss and Gustav Mahler rediscovered the instrument and integrated it fully into the orchestra by giving it the same tasks as the other woodwind as the middle voice of that section. However, it was still used for special effects, e.g., as a shepherd’s shawm or for exotic sounds in Saint Saens’s Samson and Delilah (1877) or Borodin’s In Central Asia (1880). In England and Russia it had already established itself in the 1830s.

Since the 20th century particularly the English horn has been entrusted with an increasing number of solo tasks. Apart from concerts, several pieces for chamber music ensembles have been written. The English horn nevertheless remains first and foremost an orchestra instrument.