The instrument now known as the glockenspiel is a hybrid, resulting from the fusion of two different types of instrument, the "genuine" glockenspiel with real bells, and the metallophone .

The "genuine" glockenspiel consists of a set of bells of various sizes. One or more musicians play several overlaid melodic phrases. Exactly how many musicians are required depends on the size of the instrument. This style is known as carillon playing. Strict regulations and local tradition govern the order in which the notes are played. In Germany the playing of fixed bells in church or town hall belfries is known as Beiern. In many places the sequence of notes is played by an automatic mechanism which is operated by a clockwork motor. This type of music is still very much a vital part of local tradition in many areas and a great tourist attraction.
Smaller glockenspiels worked on the same principle.

Metallophones have been played in eastern Asia for more than 1,000 years; the saron and the gendèr, for instance, still perform a crucial role as melody instruments today. Metallophones were first mentioned in Europe in the middle of the 18th century. These instruments had a compass of more than three octaves, the bars were made either of the same metal as bells, or of silver, and were already arranged in the manner of a piano keyboard. The mallets had heads made of wood.

From bells to bars

In China, bells were already part of the orchestra 4,000 years ago. In the 9th century hemispherical, pear-shaped bells were widespread among occidental monks. These instruments, known as cymbala, featured small, round bells made of bronze which were suspended from a rail and struck by one or two musicians.

In the 14th century there were two types of glockenspiel: large instruments in church towers and smaller ones for playing at home. In the 17th century smaller glockenspiels began to be fitted with a keyboard which made it possible to perform more demanding parts.

The first step toward the glockenspiel used in the modern orchestra was taken by the Dutch in the 17th century. They replaced the unwieldy bells with a row of bars after the fashion of the metallophone from eastern Asia.

The glockenspiel becomes an orchestra instrument 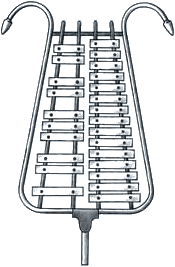 The first composer to write for the glockenspiel in the orchestra was Georg Friedrich Handel, who included it in his oratorio Saul (1739). The instrument he used was called a carillon and had a range of two and a half octaves. It had metal bells (or bars) which were played via a chromatic keyboard. The sound was purportedly like that of metal hammers beating on anvils. Handel wrote parts for the instrument in several of his operas.

For The Magic Flute (1791) Wolfgang Amadeus Mozart had a glockenspiel which was largely the same as the one Handel had known. He used it to characterize Papageno, the birdcatcher (magic bells).

Because it was more practical, the Dutch idea of replacing the sophisticated construction of bells with simple bars was widely adopted in the first half of the 19th century. The result was the keyboard glockenspiel; the bars were struck by small hammers operated by keys. This instrument made it possible to perform parts which had hitherto been written in keyboard style.

From the mid 19th century both types were found in the orchestra, but 20th century composers increasingly preferred the mallet-played instrument because of its superior tone. Nowadays the keyboard glockenspiel, or the celesta which was invented in Paris in 1886 by Auguste Mustel, is used to perform older parts containing chords and particularly demanding glockenspiel parts.

In wind bands the bell lyre is used. This portable version of the glockenspiel was developed for marching bands and was already widespread in Germany in the 19th century. Today the instrument is used in many countries, especially the USA. The instrument is so called because its frame is shaped like a lyre, a stringed instrument of antiquity.