The Near East and North Africa form the cradle of one of the oldest musical instruments known to man for which evidence, particularly in the form of grave paintings, can be traced back 6,000 years. The illustrations in the tomb of Ramses III (1200 BC) show the oldest and most common type of ancient Egyptian harp, the arched harp.

The arched harp is characterized by the curved neck, which forms a crescent-shaped arch with the body.

The flat soundbox (body) mostly took the shape of a shovel or spade. The 6–12 strings were stretched at the lower end of the instrument between the fixed pegs on the neck and a suspension rod attached to the body. The soundboard was made of wood or animal skin. The instrument was often decorated with a carving, depicting the head of a bird, for example.

The musicians (harpists) are usually shown in the sitting position, the instrument’s soundbox resting on the ground, the upper part leaning against the shoulder. These early harps were already played with both hands. 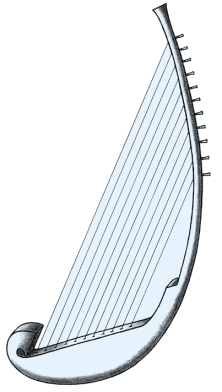 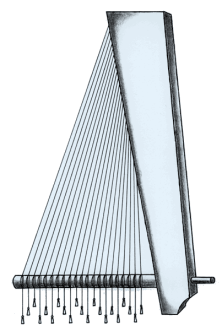 Many illustrations show harps, often several at a time, together with other instruments such as the lute, the drum and the double pipe. Both male and female harpists are depicted, some of whom are giving hand signals which are evidently intended to direct the way the music is being played; in other words, they are early conductors. At this time the harp was only played at solemnities and religious festivals and was not used at dances until later.

In around 2000 BC a new type of harp emerged which probably originated in Asia: this was the angular harp, characterized by the straight neck at right angles or a sharp angle to the body.

The suspension rod was connected to the wood soundbox and covered in leather. The strings were attached to the suspension rod’s leather covering at one end of the harp. At the other end they were wound round the neck and tied to pieces of twine to make them longer and easier to tune. The leather-covered soundbox was hollow and was strengthened by struts inside it. The cylindrical string arm was set at an acute or right angle to the body. It was customary to have up to 20 strings. A homogeneous sound was produced by virtue of the fact that the lowest string was about four times as long as the topmost one.

The harp reaches Europe in the Middle Ages

The first evidence that the harp was becoming known in Europe dates from the 8th century AD and is found in Ireland and Scotland. It is possible that the harp was introduced into these countries from Scandinavia. Later on it spread to the European mainland where it was known as the cithara anglica and replaced the lyre. The oldest harps still in existence were found in Ireland and France and date from the 14th century. In Christian iconography harps are usually depicted in connection with the Biblical King David, where they became known as “Davidic harps”. The name “hearpan” is first mentioned in around 1000 AD.

But it was a new model, the so-called frame harp, from which all later European harps up to the modern-day double-action harp evolved. The frame harp was characterized by an additional front bar (or pillar), which formed a more or less triangular frame together with the body (soundbox) and the neck. The pillar helped supporting the heightened tension of the strings which stretched between the neck and the soundbox. Frame harps could be either triangular or rectangular, the triangular form being the more usual. Early medieval harps had between seven and nine strings, later models between 20 and 25. The strings were made of gut or metal, the gut strings being played primarily with the fingertips, the metal strings with the fingernails. “Irish harps” could have as many as 43 metal strings.

Information on playing techniques is hard to come by. Strings were presumably retuned, half tones were produced by pressing the strings onto the neck, harmonics by plucking a string and touching it lightly in the middle at the same time. It is possible that harpists alternated between fingertip and fingernail playing to achieve a different timbre for melody or accompaniment tasks. 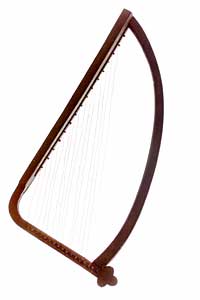 One common peculiarity deserves a mention, as it served to attain the sound ideal prevalent in the late Middle Ages: hook-like pins were frequently attached to the body of the harp (soundbox) in such a way that the strings struck it during playing. This resulted in a vibrating, rattling sound (snare). This rattling effect remained widespread until Renaissance times.

In courtly life the harp, which counts as one of the quieter instruments, was used chiefly to accompany balladeers and dancers. It was equally popular with the higher social classes (the king and the high nobility) and professional musicians (bards, troubadours, minnesingers, itinerant minstrels) who earned their living by performing love songs and heroic ballads.