The Renaissance and Baroque periods: Attempts at chromatization 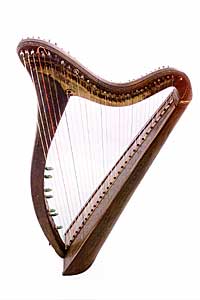 From the 15th century onward the harp’s development was to some degree dependent on that of keyboard instruments (organ), since there are certain similarities between the way the notes are arranged and the playing techniques. Efforts to improve the instrument focused mainly on the extension of the bass register. Two methods were adopted to achieve this: either the neck was curved upward and the pillar elongated to achieve the length of string required; or the neck length was retained and the lower end of the body extended, which put the pillar at a more acute angle to the body but a more obtuse angle to the neck. Renaissance harps were about 100–105 cm tall, had 25–26 gut strings and were no longer played with the fingernails but with the fingertips. The diatonically tuned strings had a range from F2–C6. The fourth string (B) or the seventh string (E) were often tuned to a half tone lower. The pitch could be raised by a half tone during playing by pressing the string down at the neck with the left thumb or index finger.

In the late Renaissance, music became more and more chromatic and in the 16th century efforts were made to turn the diatonic harp, whose range was increasingly felt to be lacking, into a chromatic instrument. The double harp (or two-rank chromatic harp) was developed. The double harp found use as a thorough-bass instrument (also in Claudio Monteverdi’s operas).

Instruments of this type had around 60 strings (about 33 on the left hand side and 26 on the right). Cross-strung instruments and harps with three ranks of strings (triple harps), which could have as many as 100 strings, were also constructed.

Toward the end of the 18th century the single-action harp replaced the double and triple harps after both models had existed side by side for some time.

In 17th century Austria a significant step in the further development of the harp was accomplished by unknown folk musicians in the Tyrol: the hook harp was fitted with hooks on the neck near the tuning pins which made it possible to shorten the strings, raising their pitch by a half tone. These hooks were originally fitted to those strings which had the most half tones, but later they were added to every string. Although there could be no doubt that it was an enormous advantage being able to turn the hooks to retune quickly, the disadvantage was that the musician had to stop playing with one hand to do so. The number of strings was reduced to about 48 as against the chromatic harp and the instrument was tuned to C major. The principle of retuning became widespread in Europe and was still used on diatonic harps into the 19th century. Instruments of this type were especially popular with folk and street musicians.

Thanks to this function and the invention of the pedal which followed soon after, the harp had succeeded once and for all in maintaining its status as a diatonic instrument, albeit one with considerable chromatic capabilities.

The first single-action pedal harps were made in around 1720 by Jakob Hochbrucker in Bavaria. The pedals, which initially numbered five and later seven, made it possible to raise the pitch of the diatonically tuned strings by a half tone. All the strings with the same note were worked by one pedal, in other words activating the pedal raised a particular note in every octave simultaneously; it was not possible to raise the pitch of one note individually. Furthermore, raising the pitch by a half tone (shortening the string) could only be done once. Because the pedals could be operated by the feet, both hands remained free to play the strings.

In the 18th century the fundamental tuning was Eb major (Ab major and Bb major were also common).

In 1820 the brilliant Parisian piano maker Sébastien Érard produced the first double-action pedal harp, the modern-day harp. On his instrument every string could twice be raised by a half tone. This was achieved by placing each string over two rotating discs, each of which had two pins. Every disc could be turned by operating a pedal: one pedal movement moved the upper disc, raising the pitch by a half tone, a second pedal movement turned the lower disc and raised the pitch a further half tone. In this way it was possible to play in all twelve keys. The strings were tuned to Cb major and the 48 strings had a range which covered a total of over six octaves. It is on this principle that modern double-action pedal harps are based.

This new technology increased the number of possible playing techniques; new playing techniques and sound effects – such as glissando over a diminished seventh chord – were soon part of the repertoire not only of the soloist and chamber musician but also of musicians in the orchestra.

From the middle of the 19th century the harp, often in a group with several others, successfully established itself as an integral part of the orchestra.