The Middle Ages – from a single note to a scale

The horns of the Middle Ages took many different forms, from the small horn carried on a strap over the shoulder to the military horn as tall as a man.

The most commonly used horns in the Middle Ages were:
The medium-sized cow-horn: because of its tremendous volume the cow-horn, which was actually made from a buffalo horn, was used for hunting.
The military horn: curved and made of metal this horn was nearly as high as a man. It had a louder and more booming note than any other horn and was therefore used for military purposes. Its successor is the Alpine horn.
The bugle: this was the smallest of all horns and was made either of animal horn or metal and was used by guards, sentries and shepherds. In courtly circles the more elegant version made of gold or ivory was used.

Instead of a mouthpiece, these instruments had an opening to blow into. Originally only a single note could be produced on the small horns and the first three naturals on the bigger ones. From about 1000 AD finger-holes, which first appeared in England, gradually increased the range of notes, following the example of pipes.

The first coiled horns, the direct forerunners of modern valve horns, were made in Europe, probably around the 12th century. Although coiled horns had already existed in early civilizations the knowledge of how to make them had been lost in Europe during the migration of peoples around 800 AD.

The Baroque period – from hunting horn to orchestra instrument

Baroque horns had cup-shaped mouthpieces which were either a flared extension of the tube mouth itself or a separate fitment to be attached. By half covering the finger-holes a chromatic scale could be played, and the technique of overblowing was also already in use. The art of “cornett playing” was already widespread. The cornett (German: Zink, Italian: cornetto, French: cornet à bouquin)  had evolved from the medieval horns. The cornett had been improved considerably during the Renaissance and the baroque instrument had a thick, usually hexagonal curved tube made of wood and occasionally metal. It had seven finger-holes, which had keys on the larger instruments, and was blown through a cup-shaped mouthpiece. As the soprano of the trombone group the cornett was adopted by art music, especially in the works of J. S. Bach. The cornett cannot properly be called a brass wind instrument as we use the term today because its timbre was considerably thinner and did not possess the metallic character peculiar to modern brass instruments.

The large, single-coil hunting horn that was used in the 17th century (Italian: corno da caccia, French: cor de chasse) underwent its first technical development in France and for this reason became known as the French horn in England. This name was later used for a model of the modern valve horn. 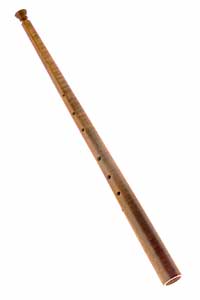 In the middle of the 17th century, when the trumpet was already being used in art music, the horn was still seeing service as a signaling instrument for hunts and battles. One of the reasons for this was that coiled, circular tubes were very difficult to make. To all intents and purposes the hunting horn was a trumpet in the shape of a horn. The tubing was long and narrow and only very slightly conical. The instrument had the same series of natural harmonics as the trumpet of that time. The difference was that the horn’s tone did not possess the metallic shrillness of the trumpet.

The popularity of the hunting horn, the timbre of which was basically no different from that of the trumpet, was mainly due to its coiled tube, which made it a deep instrument that was easy to hold and well-suited for playing trumpet parts in the lower register – at that time the deepest trumpet (in low F) had a tube that was 3.86 m long – hardly practical!

In around 1680 the first hunting horn consisting of several coils and a conical tube made in one piece was constructed in Paris. Jean Baptiste Lully (1632–1687), who introduced important innovations in orchestral techniques (he expanded the string orchestra to five parts and was responsible for significant developments in the minuet and concerto grosso which he helped to international recognition, beside founding the French national opera), championed this improved horn and encouraged its widespread use. His efforts led to the adoption of the hunting horn by orchestras.

From the beginning of the 18th century the hunting horn was used, particularly by Bach and Handel, to play in a variety of registers, including the highest register up to the 16th natural, as was the trumpet. In the orchestra the horn was usually played by trumpeters, parallel to the other commonly used horn of the time, the cornett. By the middle of the 18th century the latter instrument had fallen out of favor, however, and was no longer used.

In around 1700 the hunting horn underwent a fundamental change, principally at the hands of the Leichamschneider brothers in Vienna. This new design imbued the instrument with a new quality of tone, and turned it into the true French horn. Michael and Johannes Leichamschneider widened the bore, thus darkening the timbre which up until then had resembled that of the trumpet, and creating a new, characteristic horn sound. The tubing was made more conical and was coiled four times, making the instrument easier to handle. In addition the new French horn was given tuning crooks, additional sections of tubing between the mouthpiece and tube which tuned it to a different pitch.