Further developments to the French horn carried out by the Bohemian hornist Joseph Hampel (1710–1771) from 1753 gave the instrument the structure and sound characteristics it possesses today. Hampel’s greatest innovation was the introduction of hand stopping for chromaticization.

Anton J. Hampel discovered that the notes of the natural harmonic series could be lowered by placing the hand in the bell, so that the gaps in the natural harmonic series could be filled. This technique gave the horn a certain chromaticism, although it goes without saying that the quality of these intermediate notes cannot be compared to the modern valve horn. For this technique, the bell was held facing downward, instead of on its side or facing upward as in the past, and the right hand was placed inside it. This produced a vast improvement in the sound quality, since stopping eliminated the shrillness and roughness of the horn’s timbre.

The timbre was further refined by the replacement of the cup-shaped mouthpiece by a funnel-shaped one, which gave the horn the mellow and romantic euphony that characterizes the modern valve horn and contrasts so sharply with the strident metallic quality of the trumpet. In 1753/54 Hampel was also responsible for the construction of the first hand horn with slide crooks: on this horn the tuning slides were placed in the middle of the tube, which meant that different crooks could be inserted more quickly, a great advantage for orchestral playing.

In terms of sound, the new French horn was an entirely new orchestral instrument and even took over many of the roles which had previously been the province of the trumpet. Hampel’s hand stopping technique filled the gaps between the notes of the harmonic series and gave the French horn a certain chromaticism; however, the stopped notes were still far from perfect: in places they sounded very dull and could only be used as transitional notes and not for carrying a melody. To circumvent this problem, classical composers either called for several different tunings in one work (in his opera Don Giovanni from 1787, Mozart calls for no less than 36 changes in horn pitch), or they avoided stopped notes altogether. In the late classical orchestral repertoire there are very few notes that would have had to be played using stopping – one exception is the horn solo in Beethoven’s 9th symphony.

The Romantic period: The era of the valve horn begins

The last crucial development in the evolution of the horn to its modern form was the invention of valves. In 1814 Heinrich Stölzel from Berlin presented a valved horn, and in 1818 he and Friedrich Blühmel were granted a patent for a piston valve. Since then the valve horn has undergone permanent improvements to its construction and sound, because the quality of the sound of the first valve horns was nowhere near as good as that of the natural hunting horns. It is for this reason that the valve horn was initially rejected – as was the valve trumpet later on – or used in the orchestra only in combination with the natural horn. Carl Maria von Weber (1786–1826), Richard Wagner (1813–1883) in his early works and Johannes Brahms (1833–1897) all preferred the sound of the natural horn. One of the first composers to write for the valve horn was Robert Schumann (1810–1856), who in 1849 wrote his Adagio and Allegro for horn in F and piano and his Concert piece for 4 horns and orchestra for the valve horn.

The structure of the modern valve horn is still basically that of the triple-valved horn, which emerged in 1830. It was the addition of the valves that gave the instrument a full chromatic range.

Toward the end of the 19th century the German instrument maker Fritz Kruspe produced the first double horn in F/Bb. From the middle of the 20th century this horn, equipped with rotary valves, gained greater acceptance than models with piston valves, and today the double horn in F/Bb is the most widely used horn in orchestral music. It is joined in most cases by horns in F, in high Bb and the triple horn in F/Bb/high f. 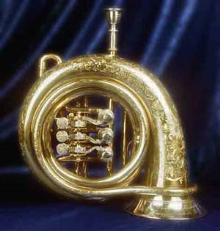