The frame drum and timbrel in the Middle Ages

Medieval Europe was home to an enormous variety of drums, most of which had originated in the Orient. The most widespread forms were the frame drum and the timbrel, a forerunner of the present-day tambourine. The frame drum consisted of a rectangular or circular wood frame with a head; the underside was open. The main difference between the frame drum and the timbrel was the presence of the jingles that were attached to the latter’s shell. While the timbrel was still struck with the flat of the hand in the Middle Ages, like its predecessor in antiquity, an additional, one-handed technique was emerging for the frame drum: traveling minstrels used it mostly to accompany the single-handed pipe and hung it to one side on a strap over the shoulder, where the musician struck it with a beater while playing the pipe with the other hand.

Evidence of a forerunner of the snare or side drum in Europe exists at least from the 14th century in the form of the tabor, a small, double-headed drum with a cylindrical shell of wood and one or more snares stretched across the batter head. The calfskin or sheepskin heads were rope tensioned, the ropes criss-crossing between the hoops of the batter and snare heads. The drum hung at the side of the “player of the pipe and tabor” who beat the rhythm with a drumstick while playing a melody on the single-handed pipe with the other hand. The minstrels’ drum had to be fairly light and easy to carry because it hung over the player’s forearm, and for this reason it was rather small and not very loud.

In the Middle Ages there were no standard names for drums. The oldest appellation was probably the Latin tympanum, which originally described flat frame drums but in the later Middle Ages was used for every drum-like instrument (including timpani). In addition to this the term tabor (German tambur, French tabour, tambour) became widespread. In German-speaking countries the onomatopoeic name Trommel (from the Old High German trumme, trumbe = booming instrument) appeared in the 12th century and initially described both membranophones and trumpets. It is from this term that the English word drum (drome, drume) evolved which replaced the name tabor in the 16th century.

Side drum or field drum

In the 14th century the practice of one man playing both pipe and drum ended, the instruments being played henceforth by two musicians. This separation was a consequence of the way the two instruments were evolving: the pipe’s compass was increased, making it necessary to use both hands to play the instrument, and the relatively soft-sounding tabor was made larger to increase its volume, which was a requirement particularly of military music. The result was the side or field drum.

The history of the town of Basel in Switzerland records the existence of an “Association of Drum and Fife” as early as 1332. The members of this “guild” were important figures at public festivities.

In the course of the 15th century the drum that was struck from the side became ever larger and ever louder to meet the changing requirements of military bands. It became too large to be hung over the forearm and was now attached to a strap over the drummer’s shoulder or tied to a belt around his waist. The widely known “Swiss” drums became the model for drum-makers all over Europe. The small tabor remained in use as a folk instrument while the new, large drum became an important instrument with lansquenets (German foot soldiers). It is for this reason that the side drum is sometimes also called the field drum, or, in historical contexts, the lansquenet drum (tambour de lansquenet) or long drum. “Fife and drum” symbolized the common foot soldiers, while trumpets and kettledrums represented the cavalry.

The field drum was between 50 and 70 cm deep (some models were as deep as one meter) and had a diameter of 50 cm. It was beaten with a pair of heavy sticks. From the 16th century the snares were stretched across the lower skin, the snare head. 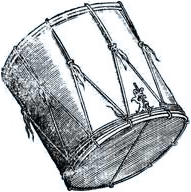 The field drum’s main task was to give signals and mark the marching rhythm. Single and double beats and rolls were already standard playing techniques.
In the 17th and 18th centuries the field drum continued to evolve within the context of military bands. One of the principal aims was to reduce its dimensions, especially the depth of the shell, while retaining the volume.

This smaller version of the field drum is nowadays called the Basel or parade drum. The drums used by the distinguished Basel Drum Associations still have the original form, the head tensioned extremely tightly by criss-crossing cords to produce a bright tone. The Basel drumming style has a long tradition in which bounces and virtuoso embellishments play an important role. On contemporary models of this drum the head is tensioned with screws. 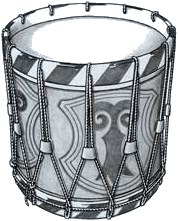 When in the mid 18th century the bass drum and Turkish drum arrived at the courts of European princes with Janissary music the depth of the side drum’s shell had already been reduced to 40–45 cm, its diameter to 40 cm. The body, previously made of wood, could now also be brass.

In the 19th century the drum’s dimensions were reduced to a shell depth of about 40 cm and a diameter of 40 cm, in other words, the depth now corresponded to the head diameter. Such drums became widespread in many countries. English speakers called it the military snare drum, Germans the Militärtrommel, the French the tambour militaire and the Italians the tamburo militare. This drum is still used in military bands today.

At the same time manuals on the basics of drumming began appearing in Europe and the USA. In addition, drummers in military bands had to be able to play a large number of signal calls which with orders were passed on to the troops in a coded drum pattern. In the 19th century bugles took over this task. Drums were also used as signaling instruments in shipping and navigation, and, albeit rarely, in civilian life.

Admittance into the orchestra

100 years later than the timpani – in the second half of the 18th century – the side or field drum appeared in the orchestra for the first time, under the name tambour: Georg Friedrich Handel and Christoph Willibald Gluck used the instrument in their Fireworks Music (1749) and Iphigenie auf Tauris (1779) respectively. But drums have never achieved the same importance as timpani in the orchestra and their chief province remains marching music to this day. Because the drum had often been used in the midst of battle its first tasks in the orchestra were to evoke a military atmosphere, as in Josef Haydn’s Military Symphony (1794). Ludwig van Beethoven gave the drums authentic tasks in his battle symphony Wellington’s Victory (1813), giving each of the armies its own drum signal.

The drum was used more extensively in the opera orchestra, e.g. by Gioacchino Rossini, who even used it as a solo instrument in his opera The Thieving Magpie (1817), which earned him the nickname “Tamburossini”.

Beside the tambour – in historical scores this refers to whichever form of the side drum was in use at the time – an instrument with the name tambourin enjoyed huge popularity especially in 18th century French opera. This was a drum played with one hand and made of very light wood, with a shell about 70 cm deep and a single head. Direct descendants of this tambourin or tambour provençal are still used today in folk music in southern France. The instrument should not be confused with the tambourine with its jingles.

In 1837 the Englishman Cornelius Ward was a central figure in the invention of screw tensioning, which rapidly replaced rope or cord tensioning. This innovation meant that the snare drum could now be even flatter: the shell depth was reduced to 20 cm, in some instances even to 10 cm.

In the second half of the 19th century flat drums with a larger diameter (approx. 35 cm) than shell depth were adopted as rhythm instruments by salon orchestras, dance bands and jazz ensembles. At the beginning of the 20th century this small version became generally known as the snare drum or side drum. The best-known orchestra piece in which the snare drum plays a vital role is Maurice Ravel’s Boléro (1928).

At the beginning of the 20th century the snare drum was already an essential component of jazz percussion. The influence of jazz brought a host of innovations to the snare drum’s construction and playing techniques.

The hoops, which until the end of the 19th century had been made of wood, were replaced by metal ones. In 1898 the percussionist Ulysses Grant Leedy made the first adjustable stands for the snare drum. In about 1914 Robert Danly invented the snare strainer to lift off the snares, making it possible to produce a kind of tom-tom effect on the snare drum. In 1957 the first drum with a synthetic head appeared on the market. Because of its resistance to changes in temperature and humidity – it is waterproof, robust and cheap – the plastic head proved a huge success in popular music, whereas orchestra musicians preferred to continue with natural heads, which, for the most part, they still do today.

20th century composers expanded the snare drum’s range of tasks: beside its traditional rhythmic function, which became more complex and varied, tonal aspects gained importance. Moreover, the drum was also used as a solo instrument. Efforts to find new timbres resulted in experiments with the striking spot and various types of stick. Ultimately new techniques such as striking the rim, or the rim shot (striking the head and the rim at the same time) or playing with wire brushes were able to establish themselves in more recent orchestral works.