Drumsticks and other sticks

The snare drum is usually beaten with special drumsticks: these are thin, tapering to the tip, about 36 cm long, made of hard wood and have round or oval tips. Oval tips are sometimes covered in plastic.

In military music it is customary to use relatively thick and heavy sticks, whereas in jazz, thin and light sticks are preferred. Orchestral musicians choose their sticks according to the requirements of the work to be performed.

Occasionally other sticks are used on the snare drum: 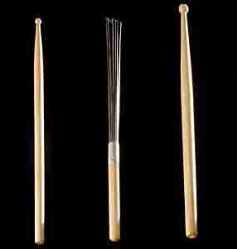