The double-action pedal harp is a frame harp consisting of three parts that form a triangle: the body, the neck and the pillar. 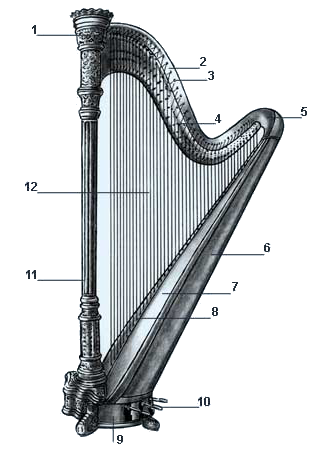 The body (soundbox) is roughly the shape of a half cone, and has a larger diameter at the base (near the bass strings) than at the top (near the high strings). The body is larger near the bass strings so that they have the required resonance. There are five sound holes on the underside of the rounded body through which the sound is projected. The flat soundboard is made of spruce and 10 mm thick; it has three functions: to absorb the string pressure, to transfer the vibrations from the strings to the soundbox and to project the sound. The strings are attached to the suspension rod, which lies on the soundboard, at an angle of 36 degrees to it. A reinforcing board runs parallel to the suspension rod inside the harp.

The neck sweeps up and forward like a snake and is often decorated with animal or human-like mythological figures.

On the outer edge are the tuning pegs and two rows of rotating discs (the upper and lower discs). The pegs can be turned with the aid of a tuning wrench and serve to tune the strings in preparation for playing.

The mechanism that operates the discs is inside the neck and is used for altering the pitch of the strings during playing. This mechanism is activated by seven pedals. By depressing a pedal once the upper disc is turned, its pins touch the string and shorten it, raising its pitch by a half tone. If the pedal is depressed a second time it locks in a lower notch and turns the lower disc, raising the pitch of the same string a further semitone. In other words, the pitch of each string can twice be raised by a half tone.

When a pedal is operated the corresponding note is retuned in all six and a half octaves, because the discs turned by one pedal movement are connected to each other by wires and therefore react simultaneously. The strings are between the neck and the body.

The pillar has two tasks: on the one hand it stabilizes the frame and on the other it contains the rod mechanism in its hollow interior. The rod mechanism consists of hinged rods which transfer the pressure on the pedals to the pegs on the neck.

The center of gravity is contained in the foot and gives the instrument stability when it is not being played. The foot also houses the seven pedals, one pedal for every note of the diatonic scale. By operating a pedal each octave of a note is retuned. The left foot operates the Cb, Db and Bb pedals, the right foot the Eb, Fb, Gb and Ab pedals.