Trombones and trumpets evolved from the medieval buisine, a brass wind instrument that originated in southern Italy in the 11th century and took two principal forms: the first was a conical tube that flared as the length increased, ending in a deep bell; the tubing was curved, like an animal horn, and could even become coiled in longer versions. It is this instrument from which the French horn and other instruments of the saxhorn and flugelhorn families evolved. The second form consisted of a long cylindrical tube (unvarying bore size), upon which a broad, shallow bell was mounted. This was the forerunner of trumpets and trombones.

15th century – the birth of the trombone

The modern trombone originated in Burgundy in the middle of the 15th century. Efforts to shorten the slide lengths of the S-shaped slide trumpet resulted in the invention of the U-shaped slide. This simple construction has remained unchanged to this day: every shift of the slide, which is composed of two parallel cylindrical tubes, doubled the total length of tubing, i.e., the length of the slide was halved between each position. This made it possible not only to play as quickly as on the trumpet, but also to reach the tenor and bass registers. In only a few decades the trombone gained such popularity in Europe that along with the bombarde, shawm (reed instruments of the period) and cornett it became standard in court orchestras around 1500, for example at the court of Emperor Maximilian I.

By the end of the 15th century, Nuremberg in Germany had already become an important center for the construction of trombones. Unlike today’s instruments, these early trombones had a very slender sound thanks to their smaller bore and the only very slight taper toward the bell, resulting in a sound which could swell to resounding magnificence in the trombone chorus.

Its slender sound, agility and ability permanently to adjust its intonation – which are all properties of the human voice – meant that in the 16th and 17th centuries the trombone was ideally suited for accompanying choral music. At the beginning of the 17th century the slide system was added which is still used today. Following on from this, whole instrument families were constructed, consisting of soprano trombones in Bb and C, alto trombones in F and Eb, a tenor trombone in Bb, a bass trombone in F and Eb and a contrabass trombone in Bb. Giovanni Gabrieli (1557–1612), the first composer of purely instrumental pieces with specific instructions as to their instrumentation, calls for the trombone family in his "Symphoniae Sacrae". Heinrich Schütz (1585–1672) and J. S. Bach, in his cantatas, also wrote four-part passages for trombones, sometimes in unison with the choir voices (colla parte) and sometimes contrasting with them.

The timbre of the baroque trombone differs from that of today’s instrument: the narrower bore produced a thinner sound; the narrower bell was more conducive to the production of the higher partials, while the thicker walls of the tubing prevented a shrill blare. In keeping with the sound ideal it was the instrument’s task to combine with the voices, the woodwinds or the strings: thus the bass trombone was used in combination with the violins and cellos or the viola and alto trombone. Trombones also played the cantus firmus or the thorough-bass in a brass ensemble together with the trumpets or cornets.

Partials whose vibrations are in a whole-number ratio (1:2:3:4:5:6 …) with each other are called overtones or harmonic partials. The numbering of the overtones differs from that of the partials since the deepest tone, the primary or fundamental, is not counted (fundamental = 1st partial, 1st overtone = 2nd partial, 2nd overtone = 3rd partial etc.). Whereas the fundamental is perceived as the pitch, the overtones merge to form the timbre. Today it is customary to use the numbers of the partials since they correspond with the rations of the wave vibrations.

Lining up overtones one behind the other produces the series of overtones. The overtones are also known as “harmonics”. As always in acoustics, the ratio of partials’ vibrations with each other is given from low to high.

The numerical relationship between the harmonic partials (overtones) was discovered by Pythagoras (approx. 500 B.C.). Over the course of history they became the mathematical basis of the Western theory of intervals. 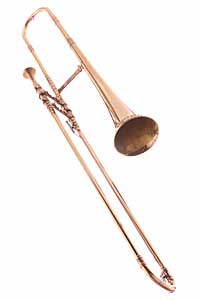 Classical and Romantic music – the three-part trombone section establishes itself

During the 18th century the soprano trombone’s role as a melodic instrument was taken over by the cornett and the trumpet – although Mozart (1756–1791) stills calls for the soprano trombone in his Mass in C minor KV 427 (1783) – and in the 19th century it disappeared from orchestral music altogether. The alto trombone remained in use until the middle of the 19th century and was part of the characteristic trio of trombones – alto, tenor and bass – which still held its place as standard in the Romantic orchestra after the alto trombone had generally been superseded by the tenor.

For nearly a century the trombone had been given fairly humble roles to play – solemn passages, chords, sustained notes, colla parte with the voices. Only in church music, in which it had also been used as a solo instrument, had it enjoyed any prominence. But toward the end of the 18th century the trombone began to gain new importance.

The development of the valve system at the beginning of the 19th century meant that trumpets and horns could now play a full chromatic scale, thus improving the standing of brass instruments in the orchestra in relation to the strings. The brass instruments’ new tasks also resulted in new demands on the trombones. The broadening of the bore and bell gave the trombone a much richer and more metallic sound, allying it more to the trumpet, while the French horn, with its more mellow sound, became more and more closely associated with the woodwinds.

From 1830 valve trombones, constructed primarily on account of their agility, became increasingly popular, and were used particularly in Italy and in German military bands. Although Verdi included several extremely challenging passages for valve trombone in his operas, it failed to gain widespread acceptance, principally because it did not possess the characteristic glissando of the slide trombone.

In the symphony and opera orchestras of the 19th century the standard orchestration for trombones was three-part, usually two tenor trombones and a tenor-bass. A fourth instrument was often added to reinforce the bass in unison , to play the bass part an octave deeper or to play the bass part on its own. The fact that several instruments shared this task during the 19th century without a satisfactory solution being found reveals an instrumentation problem which has often been the subject of discourses in instrumentation theory: the ophicleide (a bugle with keys), which functioned as a bass instrument to the trombones, had a rough and imperfect sound and was later replaced by the tuba, which, however, has a different timbre from the trombones. A solution was later found with the construction of the contrabass trombone.

In 19th century orchestras trombones were used principally for the following tasks: harmonic/chordal fundament, melody (solo and in combination with other instruments), bass parts together with the double-basses, reinforcement of the vocal parts and reinforcement of sound. The trombone also gained importance as a solo instrument (Rimsky-Korsakov: "Concerto for Trombone and Wind Orchestra")

While the four-part trombone section was maintained in 20th century orchestras, a whole new range of playing techniques was introduced: vibrato, glissando, triple and flutter tonguing. The instrument’s flexibility meant that it was soon playing a leading role as a solo jazz instrument, since the intonation required for jazz was easy to play on it.

In the course of its history the trombone has become increasingly versatile and its stylistic possibilities have grown to the point where today the instrument is no longer subject to any stylistic constraints.