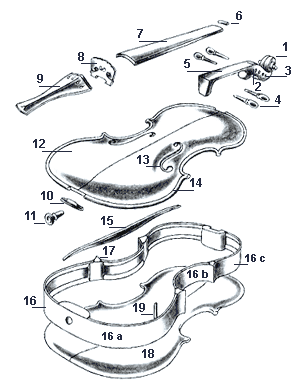 The body is made of slow-growing wood of even density, since this type of wood offers the best resonance. Spruce is used for the belly, maple for the back and ribs.

To make the belly a wedge is cut out of a piece of spruce and split down the middle to form two symmetrical parts. These are then glued together so that the older wood – where the rings are closer together – are in the middle. This flat piece of wood is planed to a thickness of about 3 mm in the middle and progessively thinner toward the edges to form a vault. The F-holes that are cut into the belly help it to vibrate near the bridge and improve the projection of sound from the body’s interior. The back is made in a similar way, either from one or two pieces of maple. The curved ribs join the belly to the back and consist of the upper bout, middle bout and lower bout. The body is given added stability by the top block, lower block and four corner blocks inside. The edges of the belly and back are inlaid with pearwood or ebony to strengthen the joins; this inlay is called purfling. There has been a lot of discussion regarding the effect that varnishing the body has on the sound; what is certain is that it offers the body protection against changes in temperature and humidity.

The head and neck are carved from a single piece of maple. The neck is firmly dovetailed with the top block and is about 13 cm long. The fingerboard is solid ebony, joined to the neck and projecting over the belly. Older fingerboards, from around 1700, were only about 20 cm long and therefore rather shorter than today’s 27 cm. The strings are parallel to the fingerboard.

The lowest string is the G string which is usually made of gut and wound with silver or copper wire. The D and A strings are made either of gut or plastic and are aluminum-wound, the E string is normally made of steel. So that the tension of the four strings is more or less equal, which is very important for the projection of the sound, strings with different diameters or gauges are used. The E string is pulled a little tighter than the others in order to achieve the brilliance required of it.

The bridge is positioned between the F-holes and is made of maple, 30 mm high and 40 mm wide. The pressure of the strings presses it against the belly. The bridge transmits the vibrations of the strings to the belly via two small feet. Even the smallest changes to height, thickness, shape or position on the belly influence the sound. Earlier models were much more robust than today’s.

The bass bar is a 28 cm long and 5 mm wide piece of wood (maple or fir) glued lengthwise on the inside of the belly under the left foot of the bridge (G string) and transmits the vibrations of the bridge’s left foot, the low notes, to the belly.

The soundpost, a 6 mm thick rod made of spruce, is placed next to the bridge’s right foot and wedged between the back and the belly. Because of its vital importance to the instrument’s sound it is often called the “soul” of the violin. Its task is to transfer the top string’s vibrations to the back. Even the smallest changes to its position influence the sound.

The mute (sordino) can be made of a wide variety of materials: wood, rubber, plastic, leather or brass. It is placed on the bridge and has the effect of reducing the projection of the higher partials with a frequency of over 2000 hertz. As a result, the brightness and loudness of the sound is reduced.

The chin rest, which is made of wood or plastic, and the shoulder rest, made of fabric, support the instrument in such a way as to allow the violinist’s left hand greater freedom of movement and prevent the shoulder from damping the vibrations.

Today a ratio of 2:3 between neck and belly is regarded as the ideal. The term, however, also refers to the overall size of the instrument: standard-sized violins are referred to as 4/4 violins, smaller models with scaling of 7/8 are made for players with smaller hands; for children, the scaling can be reduced to 1/16. This has the advantage of reducing the distances on the fingerboard while maintaining the tuning, making it easier for smaller hands to play.