The violin is a non-transposing instrument notated in treble clef.

The variety of playing techniques used on stringed instruments means there are a number of features peculiar to violin notation.

Détaché / Detached
Non–legato technique, strokes alternately up and down without the bow being lifted from the string.

1. Détaché or detached is often written explicitly into the score.
2. Strong détaché is indicated by a dot above the note.
3. The strongest détaché consists solely of downstrokes. The bow is lifted from the string after every stroke.

Martelé
Hammered stroke (in Italian martellato = hammered).
Every stroke, whether up or down, is ended abruptly, the bow remaining on the string.

Sul tasto and sul ponticello
Because of the effect it has on timbre the place where the bow should make contact with the string is often written into the score. Sulla tastiera (or sul tasto, sur la touche meaning on the fingerboard, sul ponticello on the bridge.
Most playing techniques are possible both sul ponticello and sulla tastiera.

Measured bowed tremolo
The repetition of a note with no accent or rhythm by means of very fast up and downstrokes at the point. The impression given is of a “trembling” sound, which is used especially for dramatic effect and tonal intensification. Double stops can also be played tremolo. The bow tremolo is usually measured, i.e. the number of strokes corresponds exactly to the notated division of the whole note value which determines the length of the tremolo. This kind of tremolo must be played in absolute synchronization by all the violinists. Freely playable tremolo also exists.
Tremolos have been part of the strings’ standard repertoire of effects since the beginning of the 19th century.

Behind the bridge
The string is bowed between the bridge and the string tuner.
An X is written on the staff at the pitch levels corresponding to the open strings which are to be played. The pitch heard is indeterminate, the different strings produce various pitches. 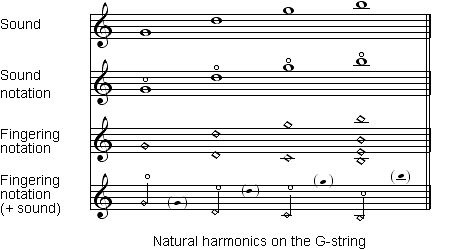 Pizzicato
Pizzicato with the left hand is indicated by a + above the note. Alban Berg: Violin Concerto.