Preparing the recordings of Vienna Dimension Strings II in our in-house recording facility “Silent Stage” revealed that various wooden mutes can have very different sonic results – even though they look very similar. Selecting the “right” mute for each individual instrument was therefore as important as the player positioning and the placement of microphones. We selected and marked the best mute for each instrument to ensure a consistent string timbre during the entire recording process of almost three years. Since forgetting or even losing a mute would have been devastating during that time, we kept all mutes in a safe place at our “Silent Stage”, handing them out to the musicians just before the recording sessions and collecting them again afterwards. However, it happened that musicians still forgot to put the mutes on the bridge of their instrument before the recordings started. For this reason, a new rule was introduced, committing the musicians to “atone for their sins” directly with the senior recording engineer – offering sweets, preferably original Viennese Manner wafers. And since there was often one musician in every session who forgot to adjust the mute on his instrument, all team members were constantly supplied with sweets and nibbles that contributed to keeping up their motivation. 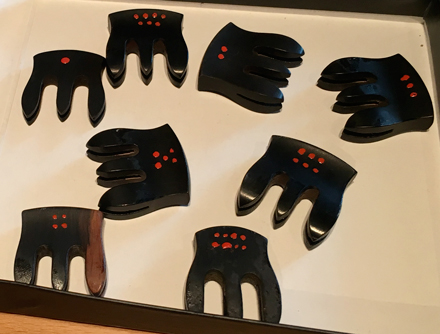