Founded in 1346, the pilgrimage church Maria Strassengel near Graz in Styria is one of Austria’s most important Late Gothic ecclesiastical buildings. The church's comparatively small main nave impresses one with its wonderful acoustics whose outstanding feature is a dense and strikingly brief reverb of about 3 seconds length.

For Vienna MIR Pro 3D, the nave was recorded from four microphone positions: Mic 1 is positioned near the altar, Mic 2 in the middle of the nave, and Mic 3 near the main entrance beneath the organ gallery. Mic 4 was positioned almost on the same horizontal coordinates as Mic 3, but about 6 meters above it on the organ gallery. All in all, over 2,000 impulse responses were gathered to virtually recreate the wonderful acoustics of this magical location. 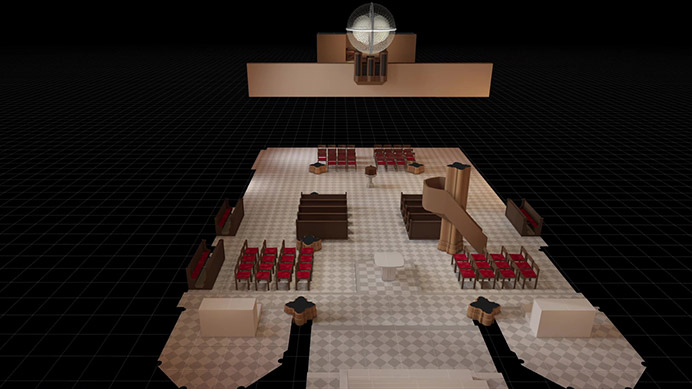 For more than a century the Steinhofkirche with its incomparable acoustic properties has been a truly magical attraction for musicians and music enthusiasts. It is still used regularly for concerts today.

Built at the beginning of the 20th century in today’s Socio-medical Center at Baumgartner Höhe, the church is one of Vienna’s famous Jugendstil (Art Nouveau) landmarks. It sits in the so-called “White City” that is comprised of 61 buildings and was, in its day, the largest and most modern psychiatric institution of its kind.

For those who are mainly interested in the acoustic peculiarities of this unique church, it may be regarded simply as the “Viennese Taj Mahal”. Ten seconds of long*, dense, crystal-clear reverb engulf the visitor after entering the nave – an experience that transports believers and musicians alike to other spheres.

For Vienna MIR Pro 3D the Steinhofkirche’s nave was recorded from three microphone positions: Mic 1 is positioned near the altar, Mic 2 in the middle of the nave under the cupola, and Mic 3 near the main entrance next to the organ gallery. All in all, over 2,200 IRs were gathered to virtually recreate the acoustics of this building.

Added to this are a number of so-called HotSpots – two positions in the left and right side aisles each, one position in the rear at the main entrance, and the entire balcony of the organ gallery. This means that basically the Steinhofkriche can be used in Vienna MIR Pro 3D from each side of the main microphones, which allows you to put a real surround ensemble into place! Apart from that, the gilded pulpit left of the altar (marked by a red velvet parapet) is especially noteworthy. Here, too, instruments can be placed and freely rotated – the perfect place for a “preaching” soloist.

* In Vienna MIR Pro 3D’s Room Editor you may shorten the reverb times of a Venue. Since the Steinhofkirche’s reverb tails are incredibly dense and consistent, even radical changes of the mean impulse lengths to less than 3 seconds still make sense. Reduced to these more conventional values, an entire new field of possible applications opens up besides the obvious epic, sacred or meditative compositions.