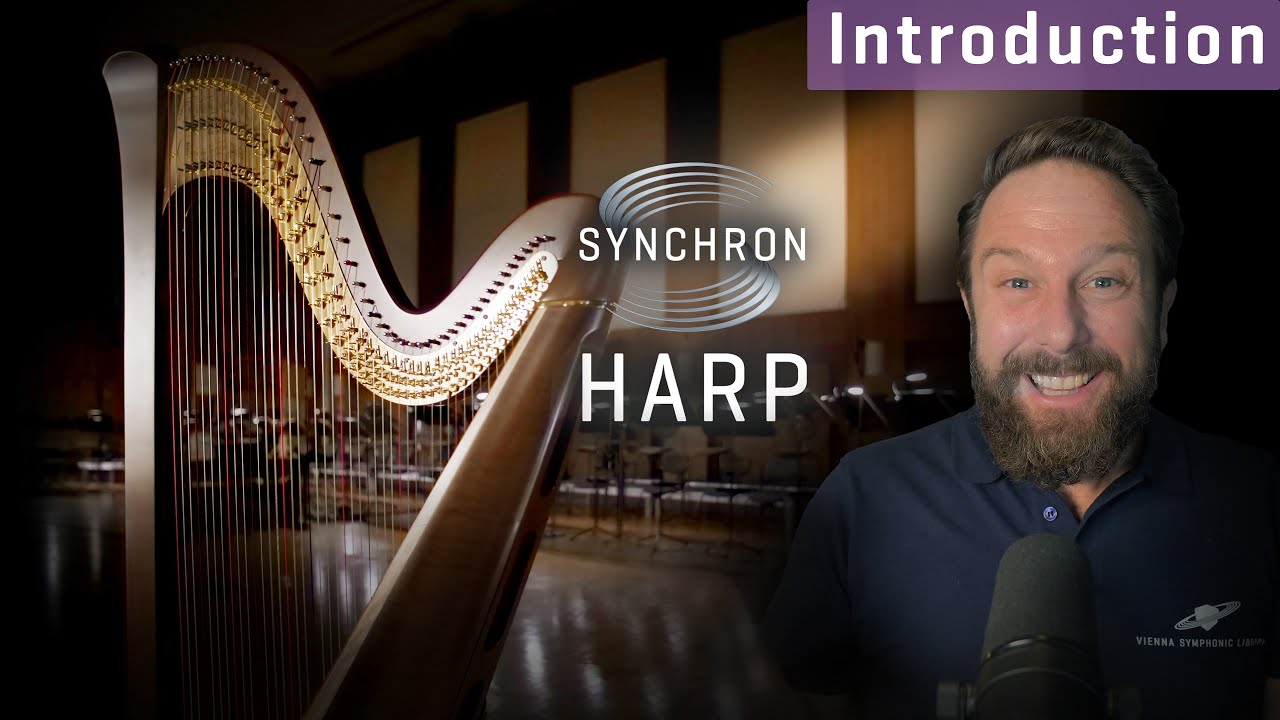 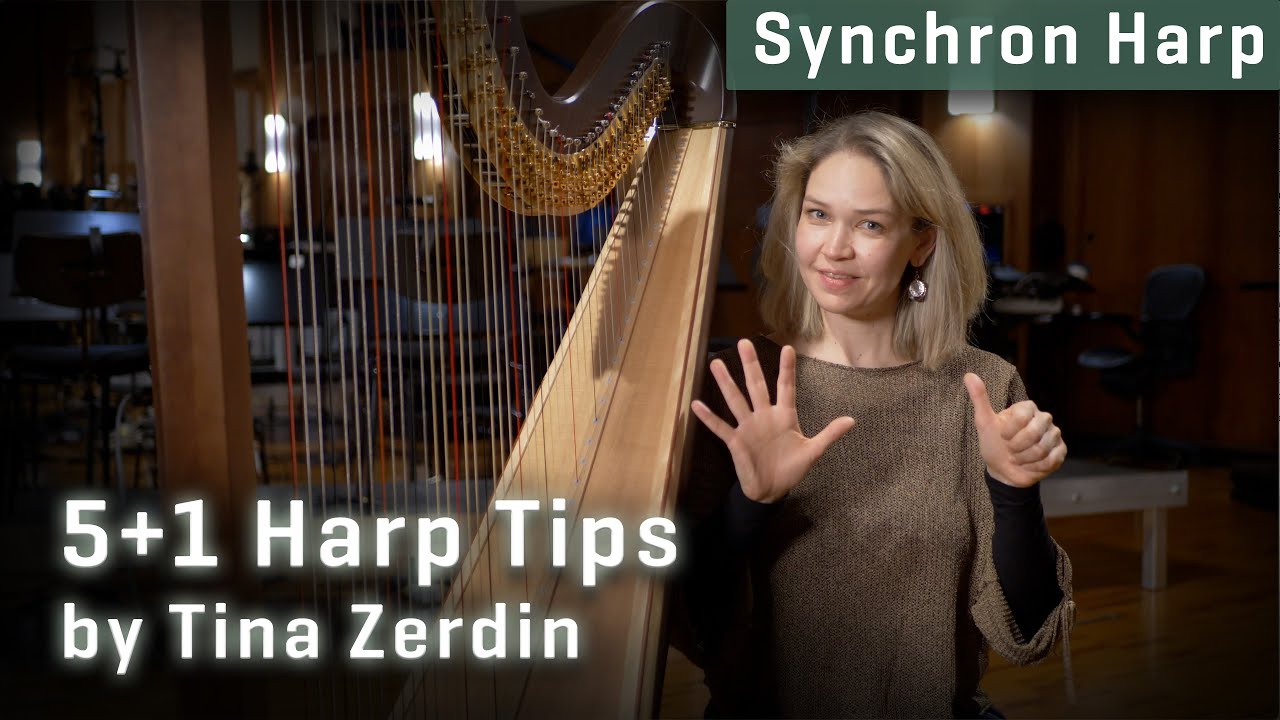 The harp is a supremely beautiful instrument that is also very complex. Even some of the greatest classical composers often found it difficult to write for the harp and its multi-faceted possibilities. The instrument is equally challenging to play. It’s almost impossible to master a demanding piece just by sight-reading, requiring adequate time to prepare and work out the pedaling. On the other hand, a harp can achieve sounds no other instrument can approach, particularly in the hands of a master player in an ideal acoustic environment.

With Tina Žerdin, long-time harpist of the Synchron Stage Orchestra, a wonderful Lyon & Healy Style 30 Concert Grand harp placed in the large hall of Synchron Stage Vienna, and the talent of Chief Recording Engineer Bernd Mazagg, we knew we had all of the elements put in place to create the best possible recordings.

But the idea was also to help you, composers and music creators, to write for this instrument and to play it authentically on the keyboard. Our goal was to create a software instrument with a user interface that lets you play sophisticated harp pieces, even with average keyboard skills.

Enter the Synchron Harp Player. In Chromatic Mode you can play the harp just like any other keyed instrument. In Pedal Mode the software recreates the pedaling mechanism and the scale possibilities of a real harp. The harp’s seven strings of each octave are represented by the white keys of the keyboard. Thus, playing a glissando is as easy as gliding your fingers over the white keys as you would on a real harp’s strings.

To control the seven harp pedals in Pedal Mode, there are seven function keys (key switches), with key velocity determining the top, middle and bottom position of each pedal. There are also several additional ways to select pedalizations. You can use separate key switches to access pre-configured tonalities (C, C#, D, etc.), specify the scale family (major/minor, 7th chord, whole tone, pentatonic) and the scale variant (major, melodic minor, harmonic major, harmonic minor). A Pedal Matrix that holds 144 pre-configured scales and their pedalizations can also be accessed using key switches. You can also create your own pedalizations and use a stepper when playing live, similar to the stepper of an organ for switching through registrations, one after the other. 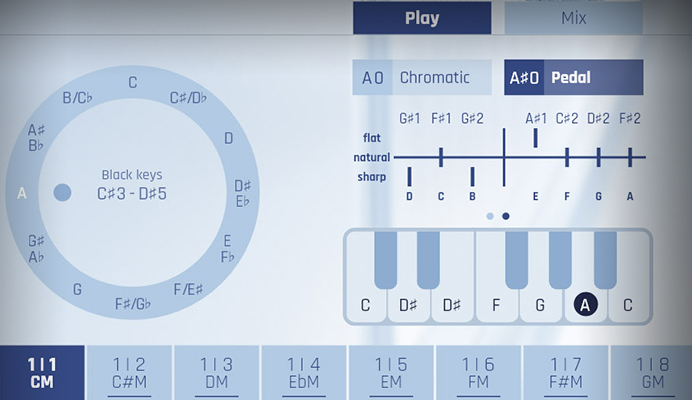 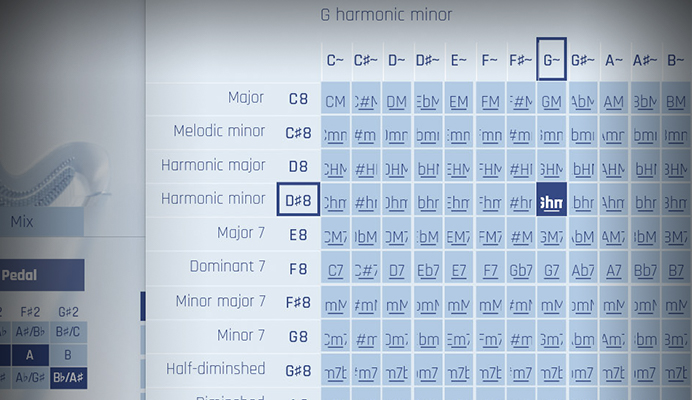 Since the Pedal Mode only uses white keys to play notes, all the black keys are available to function as key switches for accessing the pedalizations in whatever way you prefer while composing or playing live.

It’s great fun to explore the various scales. Switch one or two pedals here and there, and listen to the result. We guarantee that you will be inspired to come up with harmonic combinations that you may not have considered in your usual composition process! What’s more, everything you do in the software player can be done on a real harp, so rest assured that your composition can be performed on the actual instrument, as long as you keep in mind the time constraints of real pedal operation. The user interface of the Synchron Harp Player even depicts harp pedal diagrams that are used to notate proper pedalization in a score.

Harp Pedaling – How does it work?

The range of the harp is almost equivalent to that of the piano. There are seven strings per octave, and seven pedals: C, D, E, F, G, A, B. With all pedals in their middle position the tuning of all strings corresponds to the white keys of the piano. Moving, e.g., the C pedal up to the top position removes the little pins that press against each C string so that they ring freely in their entire length, sounding a semitone lower, in this example Cb, which is also B enharmonically. Pressing the C pedal down to its bottom position presses a second set of pins against the strings to shorten them by a semitone, resulting in C#/Db. Changing the scale from C major to A major therefore requires three pedal changes: F to F#, C to C#, and G to G#. The more pedals need to be operated at the same time, the longer it takes the harpist to change the tonality of the instrument.

Given the harp’s diatonic possibilities, glissando is a typical playing technique where the harp shines above all other instruments. Through enharmonic tuning, not only seven-note scales in major and minor are possible, but also six-note scales (including whole-note scales), pentatonic, and four-note scales. In the case of a diminished seventh chord (which contains four different notes), only one note is played by a single string, and each of the other three notes is played by two enharmonic equivalent strings, resulting in a full and rich sound. Two strings enharmonically tuned to the same note are also used when playing bisbigliando, a tremolo technique that would be impossible to perform on a single string. 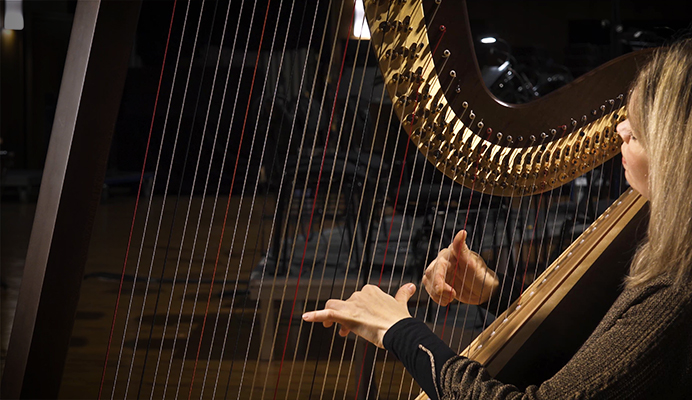 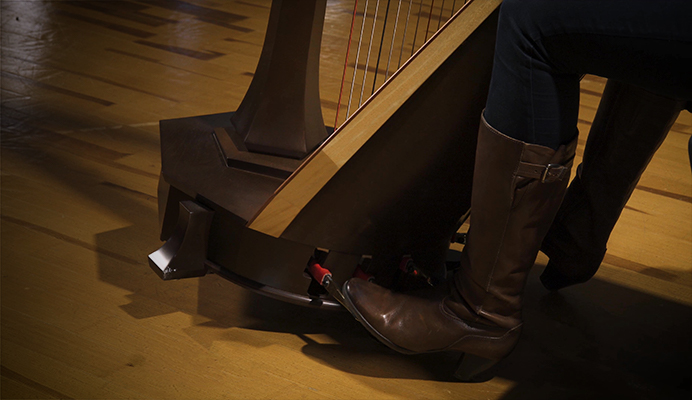 For all articulations you can choose between ringing and damped, the latter referring to the harpist stopping the string vibration with the flat hand (étouffer). The ringing decay upon releasing a key can be shortened or lengthened using release control. Dynamic range control reduces or expands the dynamic reaction of the harp to key velocity. The “Glissando Smoother” is activated automatically whenever the software recognizes a glissando, i.e., the quick succession of adjacent notes. Here you can adjust the attack of the notes to create smoother glissandos, mimicking a harpist gently stroking the strings instead of plucking them. The velocity controller lets you assign key velocity to a CC controller, e.g., the ModWheel, which allows you to create even velocities for all the notes when you’re playing glissandos on a keyboard.

To capture the the harp and the wonderful ambience of “Stage A” of Synchron Stage, our engineers employed seven separate phase-coherent microphone configurations to provide a broad range of room options. All of them are available as separate channels in the mixer section of the Synchron Harp Player. 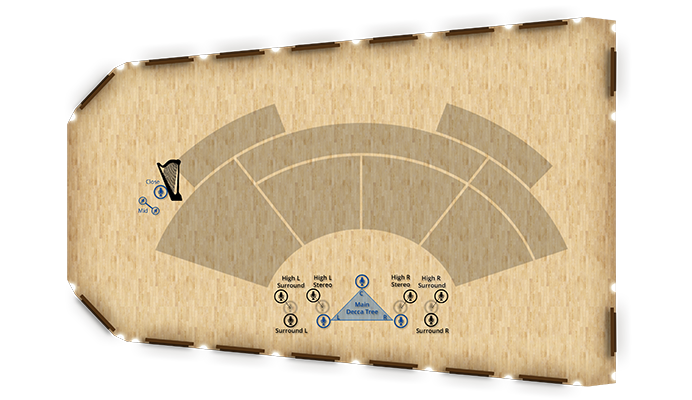 Pre-configured mixer presets provide a wide variety of tonal characteristics, from close to ambient, from from lush to mysterious, from natural to heavily processed with Signature Presets such as Intimate, Solitary, Muffled, Sharp and many others. As with all Synchron Libraries, you can mix the harp in stereo, 5.1 surround or even Dolby Atmos and 9.1 Auro 3D, or any other immersive audio format.

The Standard Library and the Full Library of Synchron Harp both include the same set of articulations and software functionalities. The difference lies in the number of provided microphone positions:

Room Mix Presets feature an excellent mix-down to stereo from the Decca tree and surround mic positions for a CPU and RAM-saving sound that’s perfectly balanced right out-of-the-box. A host of further Mixer Presets is available in the categories of “Decca Tree Multi-Mic”, “Surround to Stereo Downmix”, “Surround”, and “Signature”.