From Dream To Reality

In the 1990s, founder Herb Tucmandl, a former cello player and substitute member of the Vienna Philharmonic Orchestra, went from working as a cameraman to being a successful director in his own right. For his various award-winning productions Tucmandl even produced his own orchestral scores with computers and sample libraries. The available resources at that time, however, were nowhere near satisfactory for his needs. As an experienced orchestral musician, he grew increasingly tired of listening to the same old samples. “Composing with sample libraries is 1% creativity and 99% damage control“, he used to complain. As a result of this frustration, and with a clear need for something new, he spent hundreds of sleepless nights creating a new concept for a truly authentic orchestral sample library.

His approach was fascinatingly innovative, as Herb not only wanted to record single notes but also note transitions, which would allow for a living and believable performance for the very first time. The recordings would include a wide variety of articulations such as legato, repetitions, trills, fast runs, arpeggios, harmonics, flutter tongues, clusters, and so much more. While the largest conventional sample libraries at that time offered a mere 6,000 samples to replicate an entire orchestra, Herb developed a structure of more than one million single notes and short phrases!

It quickly became clear that a project of this scale was going to push the boundaries of computer processing power, memory and storage space. Unfortunately, computers at the time simply would not have been able to deal with such an enormous challenge. Regardless of all the doubts surrounding the project, Herb Tucmandl took his cello to a studio and recorded several thousand samples himself. After creating the first demo production he managed to convince sampling experts and music lovers alike.

Quite extraordinarily, the next obstacle facing the project turned out to be that of finding exceptional orchestral musicians in Vienna, one of the world capitals of music! The problem was that the sheer physical and psychological demands of such an endeavor differed significantly from those of well-rehearsed concert repertoire. Sitting in a recording studio for several months, sometimes even years, only playing single notes and short phrases at the highest possible level of perfection requires not only impeccable control of the instrument, but also outstanding stamina.

On top of all of this, though, was the fact that no recording facility could provide a large enough space with the high level of required sound insulation and guaranteed availability over an extended period. These challenges were remedied through the creation of the “Silent Stage”, a custom-made recording hall built in the south of Vienna. Since then, more than 200 musicians and singers have been performing there with Artistic Director Michael Hula acting as a merciless but very patient conductor. Since a recording session of 3 hours results in about 30 hours of editing, several dozen sound engineers were confined to editing suites for days and nights, plowing through a mountain of sound data (terabytes) and working meticulously to hone a perfect, authentic sound.

Since the foundation of the company in October 2000, nearly every instrument of the symphonic orchestra has not only been recorded as a solo instrument but also as part of its respective ensemble. An achievement made possible by the unique synergy of Viennese music tradition with state-of-the-art technology. The portfolio is constantly being expanded and complemented, and now even includes the “Vienna Choir”, a large, mixed choir sample library to complement the symphonic orchestra.

The first products were released in December 2002. The “First Edition” included the modules “Strings”, “Brass & Woodwinds”, “Percussion” as well as the “Performance Set”. In the summer of 2003, the “Pro Edition” with double the amount of samples was released (390,000 samples, 240 GB). Both Editions came in preconfigured formats for the software samplers TASCAM GigaStudio and Apple Logic EXS24 (by Emagic at that time). In late 2003 smaller packages of the “Horizon Series” followed. These were also offered for the samplers, Steinberg HALion and Native Instruments Kontakt. All products that included “Performance Elements” were offered with Vienna Symphonic Library’s first software application, the MIDI utility “Performance Tool”, that – for the very first time in sampling technology – allowed users to play real legatos and convincing note repetitions in real-time.

The call for a closer integration between samples and software for heightened realism and usability led to the development of a proprietary sample playback engine, the Vienna Instruments player.

Since their introduction in late 2005, VIENNA INSTRUMENTS have been the most powerful virtual instruments on the market, integrating intelligent Performance Algorithms with their easy-to-use VST/AU/AAX plug-in instruments to orchestrate an inconceivably vast array of samples. Composers, arrangers and music producers can now reproduce virtually every nuance soloists or ensembles are capable of playing with absolutely authentic results.

The mixing and host software, VIENNA ENSEMBLE PRO, is the first MIDI and audio Local Area Network (LAN) solution that connects PCs and Macs with a standard Gigabit Ethernet connection. MIDI and digital audio flows seamlessly without any additional audio hardware to balance the processing across several computers. Sample playback stays in sync with the master Digital Audio Workstation with no latency issues – a flawles software solution that has turned the industry's collective head.

In 2008, our software developers created VIENNA SUITE, then the first effect plug-in suite that runs on both 64-bit and 32-bit PCs and Macs. Its eleven audio tools – including equalizers, compressor, limiters, convolution reverb, and more – are leading the way in high-end sound and ease-of-use. The plug-ins offer hundreds of expert presets tailor-made for Vienna Instruments.

In 2009, after several years of research and development and for the first time in music technology, VIENNA MIR enabled composers to reproduce the acoustics of concert halls authentically in real-time on a single computer. The idea was simple. Just as it is possible to sample musical instruments and all of their different facets, we can also digitize the shape of a room and its unique acoustic characteristics. The “response” of any room to a strictly defined acoustic impulse can be recorded and imprinted on any other “dry” signal by a mathematical process called convolution. The audible result is the same as if the signal were recorded in that very room. For the composer, all this happens under the hood of this powerful application. An instrument can be placed in the desired location and facing direction on the stage of a selected room (e.g., Vienna Konzerthaus, Teldex Studio Berlin, The Sage Gateshead, to name a few) and – through the magic of technology – it sounds like it is being played in that room!

In 2017, the VIENNA SYNCHRON PLAYER initiated another new era of orchestral sample library production. The player software hosts our Synchron Series, which features instruments recorded at the Synchron Stage, or re-edited and adapted to its unique acoustics. The sample player's brand new audio engine was built from the ground up. It comes with the most powerful sample playback engine, featuring unprecedented streaming performance while providing a new level of ease-of-use. Innovative algorithms result in utmost realism and expressiveness, with a minimal need to switch articulations manually. The player also includes a full fledged internal mixer, individual delay settings for runtime compensation, and numerous other controls and effects.

The Vienna Symphonic Library's new home is a historic scoring stage refurbished and transformed into a unique, world-class recording and post production facility.

This new studio complex offers state-of-the-art recording technology, superior acoustics, and a unique integration of Vienna Symphonic Library’s award-winning software applications such as Vienna MIR Pro. Stage A, the large main hall, accommodates orchestras of up to 130 musicians. Additional studio and office facilities surround that central stage, including the 'Stage B' live room, Control Rooms A and B, several lounges, isolation booths, offices, instrument storage rooms and the score archive.

The outstanding acoustics of the facility’s 540 m² (5,813 sq.ft.) main hall (Stage A) are featured in our Synchron Series, as well as a spatial model of this venue for our award-winning software Vienna MIR. Initial recordings took place in October 2015 under the baton of acclaimed composer, orchestrator and conductor Conrad Pope, with engineer icon Dennis S. Sands behind the console. Soon after officially opening its doors, Hans Zimmer’s Remote Control Productions were among the first clients. Recording sessions were held for the Ron Howard directed feature “Inferno” (score by Hans Zimmer) and for the Netflix series “The Crown” (score by Hans Zimmer and Rupert Gregson-Williams), created by Peter Morgan (“The Queen”). 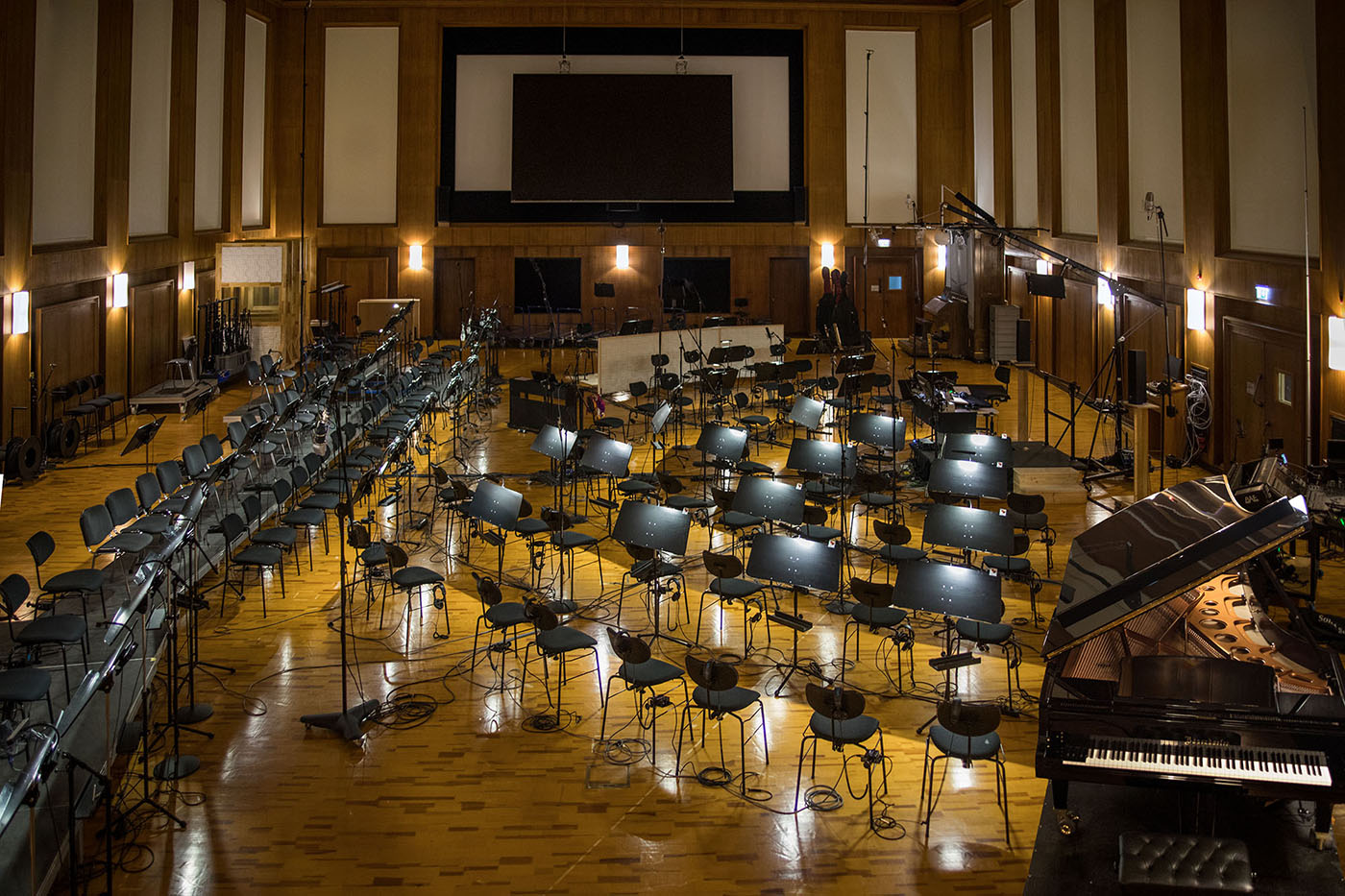