Synchron Mallets II is part of the Synchron Percussion II Collection and contains a vibraphone and crotales.

The Vibraphone was developed in 1921 by the Leedy Manufacturing Company in the USA. Due to its quick popularity, it was developed further by the same company in 1927, when it got its now familiar form with aluminum sound bars. Vibraphones have a pleasant soft sound equally suited for melodies and harmonic accompaniment.

In comparison with other mallet instruments, its sound has a relatively long sustain. As with the piano, the tone can be held with a pedal. Vibraphones also have a motor that turns so-called butterfly valves over the resonator tubes, thus creating a vibrato effect.

The vibraphone featured in Synchron Percussion II was recorded with up to eight dynamic layers and eight round robins for single strokes. It provides the following articulations: motor on and off, hard and soft mallet, single notes open and secco, and rolls. Effect techniques include pitch bend (to achieve this, a hard mallet is drawn with pressure over the sound bar), harmonics (the sound bar is pressed in the middle and played at its suspension point), glissandos as well as being played with the mallet handle, rubbed with a super ball, and bowed. 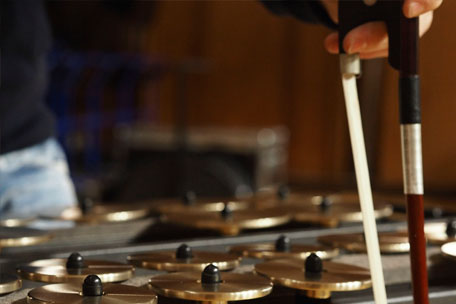 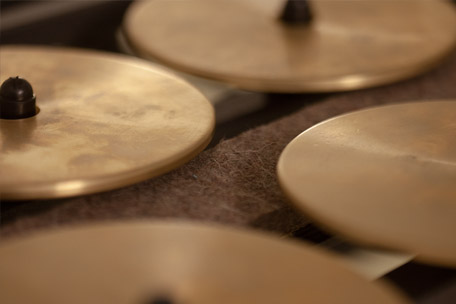 The Crotales used in today’s orchestras descended from antique cymbals and were first used during the Bronze Age in Ireland. Originally, antique cymbals were played in pairs by striking each other. Modern orchestral crotales consist of individual brass or bronze discs arranged in half tone steps. They have a very bright, bell-like sound with a relatively long sustain, which makes them similar to the glockenspiel. They are often used for melodies or for doubling leading voices.

The crotales of Synchron Percussion II are available in a range of two octaves (C6–C8). They were played with plastic and metal beaters, and sampled with up to eight dynamic layers and four round robins. Rolls, glissandos and bowed articulations are included as well.