Writing about this project has special significance for me as it takes me back to my origins in the world of music and film, which formed the basis of my later career. Guido and I were classmates at the Musikgymnasium Wien (a special upper-secondary academic school with an emphasis on music) and we both finished in 1985 with the "Matura" (A-level). At that time, Guido was a great admirer of American film music, especially of John Williams’ scores. His extraordinary talent as a young composer enabled him to write outstanding music in the “Hollywood style” as an 18 year-old student!

Since I am also a fan of John Williams and the works of Jerry Goldsmith and John Barry (to name a few) there was no question that Guido would compose the soundtrack for my first feature-length fiction film, “I Cranici dell’Ibico”. It was an epic score for large symphony orchestra, played by the orchestra of the Musikgymnasium Wien.

Looking back today – 27 years later – and after intense studies of Guido’s scores of that time I realized the outstanding achievements inherent in these early works. They are particularly noteworthy when you think of the so-called “classical” university studies of composition and conducting at that time in Vienna. American mainstream film music didn’t play a role in those studies, and nothing comparable was composed or produced. 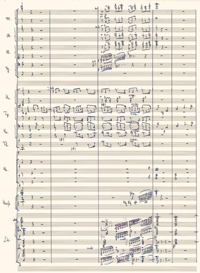