Synchron Drums I offers a selection from our Synchron Percussion I Collection, including snare drum, bass drum, eight concert toms, and two tambourines.

The snare drum (Kolberg “Piano-Forte”) covers the treble register within the orchestral percussion section. The typical sound comes from its batter (top) head combined with the resonance head at the bottom and the attached metal wires, called “snares”. The snare drum was recorded with and without the snares engaged. We’ve captured the instrument in utmost detail; single strokes in five positions on the drum, in up to 16 dynamic layers and eight variants, rolls in various dynamics and lengths, flams and variations with brushes, rods and mallets. Thanks to our new release sample technology, even crescendo and diminuendo rolls that are available in various lengths and intensities can be stopped at any time with the matching release sample being triggered. We’ve also captured hits played on the shell as well as “stick on stick” variations.

The bass drum (Kolberg “Dicke Bertha”) covers the lowest range in the orchestral percussion section and plays an essential role in almost all western musical styles. We’ve captured a wide variety of articulations, such as single strokes in 16 dynamic layers, various rolls as well as effects with three different mallets. What’s more, we’ve also recorded some extra low tunings that you can literally feel with your whole body. To round out the collection we’ve added FX sounds that can be a source of inspiration and are best suited for creating all-new soundscapes, e.g., by striking an elastic rubber ball (“superball”) over the head of the drum. It is incredible how dynamic and highly energetic Stage A of the Synchron Stage Vienna is in the low and sub-bass frequencies. Just be careful with the volume knob when you check out the low velocities on your speakers. Those sub frequencies could lead to serious damage when played back too loudly!

The concert toms (Yamaha CT-9000 series) include eight suspended tom-toms (6"/8"/10"/12"–16") with top and bottom heads, set up as a battery. We’ve recorded single strokes with four different beaters (sticks, rods, brushes and mallets) in various positions on the heads with up to 16 dynamic layers. The instruments were also treated with rasping sticks on their rims, resulting in all-new sounds.

The tambourine is a type of frame drum with pairs of small metal disks in slots around the frame. It is mainly played with the fingers, the palm, or the fist. We recorded two different instruments (Lefima 2091-A and Kolberg 2030 DW) and captured single strokes, flams, tremolos (“shakes”) and thumb rolls in various velocities and lengths. 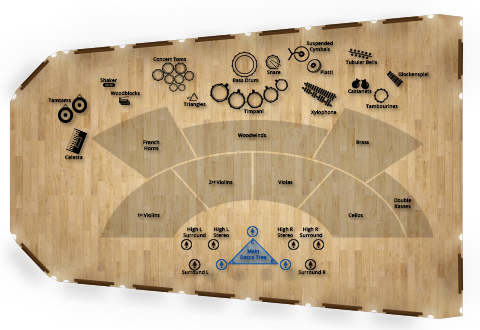 Auro 3D is an immersive audio technology that allows for three-dimensional sound perception. The Belgian company Auro Technologies developed this technology based on a special speaker configuration, adding four additional speakers to a 5.1 surround configuration. These speakers (so-called “Heights”) are situated above the front and surround speakers and generate acoustic reflections that are perceived naturally due to the fact that sounds originate from around as well as from above the listener. Thanks to the comprehensive selection of discrete audio channels of Synchron Drums I (Full Library) you may mix your instruments in Auro 3D as well as in Dolby Atmos.